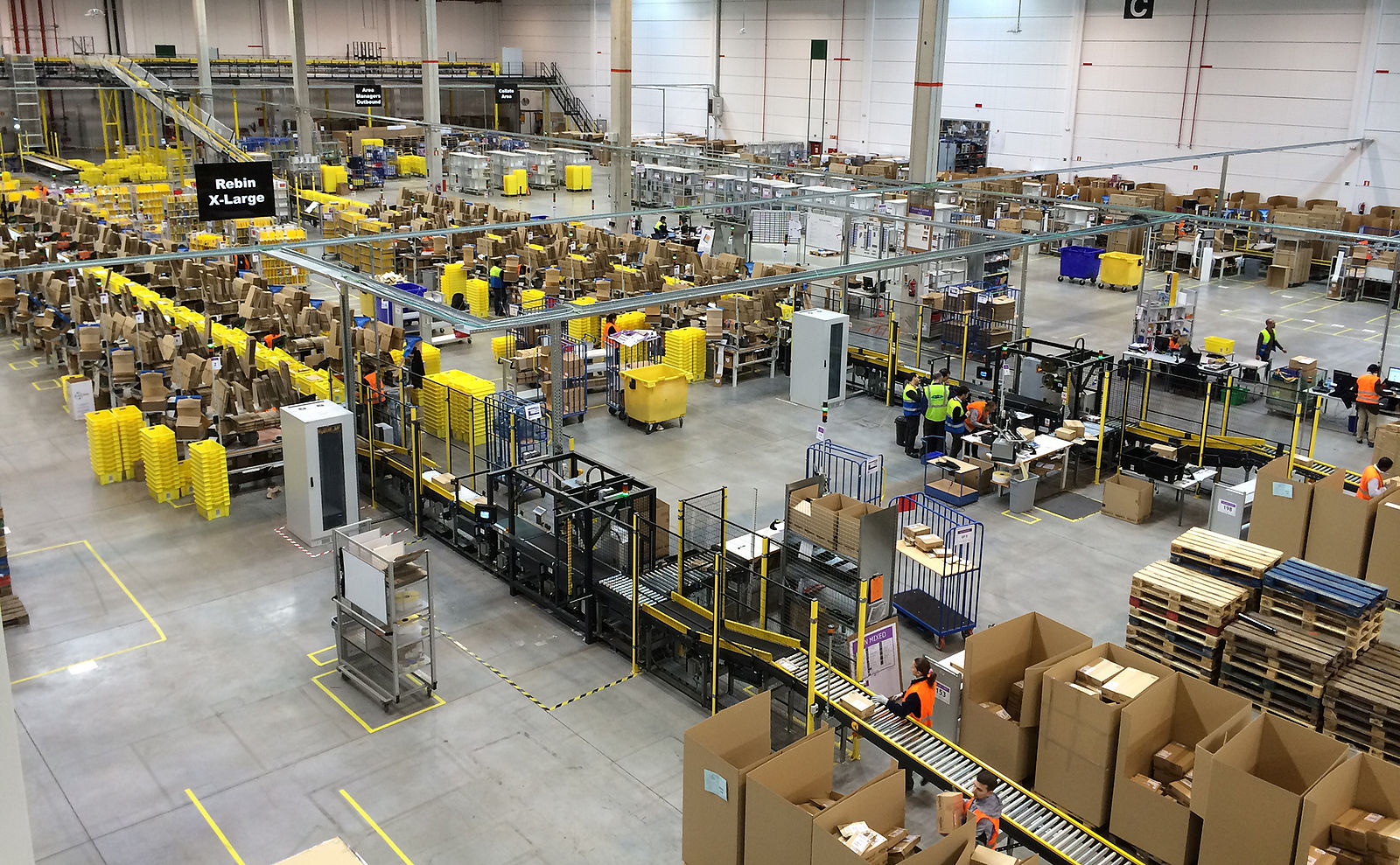 Before Covid-19 hit, we’d become used to reports about Amazon’s robotics innovations and the impending large-scale automation of warehouse jobs. But recent strikes and protests by Amazon’s very human workers have exposed how far we are from robotic warehouses. In fact, as part of its effort to keep its warehouses fully staffed during the crisis, Amazon recently announced that it is ending its recently-instituted sick leave and base pay expansions, replacing both with increased overtime pay. While higher pay encourages more workers to apply for jobs, overtime incentivizes existing workers to work longer hours. Amazon’s strategy for increasing output in the pandemic seems to be getting its human employees to work harder.

In late-February, I took what must have been one of the last public tours of an Amazon warehouse in Edison, New Jersey. Prepared to witness vast and impressive automation, I was met instead by a traffic jam of workers exiting the facility. Inside, there were of course robots—shelving units known as “pods,” whizzing stuff from one end of the warehouse to the other—performing tasks previously done by people with forklifts. (According to Amazon, these robots have raised productivity of the remaining workers by orders of magnitude.)1 But there were other innovative technologies on view, at the workstations of human “stowers,” who distribute incoming products to the pods, “pickers,” who take items off the pods to fulfil orders, and “packers,” who put the orders in boxes and tape them shut. Over their shoulders, there were clocks counting down how much time each worker had to complete each task. The technology tracks which workers fall behind, and learns how hard it can push them. In place of a human foreman, Amazon’s timers dictate the pace of work and mete out automated discipline.

In the folk legend of John Henry, the eponymous protagonist works himself to death trying to match the pace of a steam-powered hammer that has automated his job away. From John Henry’s perspective, the steam hammer, a lower-cost substitute for his own labor, was a mechanical scab. Much of the current attention to automation, AI, and the so-called “future of work” reflects the fear of John Henry’s fate. But the focus on these mechanical scabs obscures the rise of a high-tech update to another traditional enemy of workers: the company snitch.

US firms increasingly surveil their workers through digital tools. The Marriott hotel corporation, for example, tracks how long it takes housekeepers to clean a room via an app that gives the employer real-time data on the worker’s location in the hotel.2 Restaurant corporations like McDonald’s process data from cash registers to track exactly how long it takes workers to complete an order. And warehouse workers, like those at Amazon, wear devices on their bodies that track their movements around the warehouse. A 2018 survey by Gartner found that 22% of firms worldwide use employee-movement data, and 17% monitor computer usage data.3

These technologies affect workers and the broader economy differently than automation. Where Amazon’s pods replace humans with stronger and faster machines, workplace surveillance technologies raise profits through a cruder mechanism: they push each employee to work harder, striving to convert every possible second into a peak.

Given these developments, a Marxian analysis may be too kind to twenty-first century capitalism, which is failing to deliver the automation-driven productivity increases Marx predicted. Raising productivity through labor-saving capital investments, Marx believed, was key to the eventual shortening of the working day and the alleviation of human drudgery. In Marx’s periodization of the progress of industrial capitalism, he described how early, technologically unsophisticated capitalists garnered their profits through the brute extraction of more effort through the lengthening of the work day.

Restrictions on the length of the working day limited the effectiveness of this brute force means of raising profits. To compensate for shorter work days, capitalists turned to two alternative strategies: effort intensification and automation. Focused on achieving “a more perfect means of exhausting the workman,” the effect of effort intensification on output was limited by the stamina of its human workforce.4 But through automation, capitalists found a supplement to wringing diminishing increments of effort from the workforce: labor-saving, productivity-increasing capital investments. Marx noted that automation “rais[ed] the productive power of the workman, so as to enable him to produce more in a given time with the same expenditure of labor [emphasis mine].”5 As automation spread throughout the economy, a general increase in productivity allowed capitalists to not only increase their own profits, but also, by cheapening the cost of food and other necessities of their workers, created the conditions for increased working class living standards as well.

While limitless increases in raw effort are impossible due to the biological limits of human workers, the possibilities of labor-saving innovations are in principle infinite—the rising tide of productivity growth can “lift all boats” and make us all richer, even if some workers, like John Henry, suffer wage losses as they are replaced by machines. Cheaper goods, in turn, allow workers to spend more of their paychecks on new products, raising employment and wages in other sectors of the economy.

Compared to automation, squeezing effort from workers is a rather poor method of increasing output. However, responding to the profitability crisis of the 1970s, corporations have been particularly enthusiastic about disciplining labor and maximizing the extraction of effort. Institutional changes in capitalism have encouraged this, and falling job security in the final decades of the 20th century meant increased authority for managers. In the late David M. Gordon’s phrasing, post-1980, worker effort came to depend on “legions of stick wielders” in management.6

Technological developments in computer processing power, the World Wide Web, and GPS arrived in the stick-wielding era of labor management. As MIT economist Lester Thurow put it in 1992, new information and communications technologies meant that “bosses could do a lot more bossing.”7 These capabilities have only increased in the decades since, with the invention of biometric and algorithmic management technologies that allow bosses to process ever-increasing amounts of worker data in real-time. For example, domestic worker platforms like Handy and TaskRabbit collect location data on when a worker arrives at and leaves a job, while also quantifying previously difficult-to-measure and subjective performance information with customer reviews.8 As the economists Peter Skott and Frederick Guy have shown, worker surveillance technologies are “power-biased,”9 in that they improve managers’ information about worker effort levels. High-tech snitches allow managers to squeeze more effort from workers for the same level of pay, raising profits even if the new technology has no effect on technical efficiency. They extend the logic of stick-wielding, rather than labor-saving.

It is notoriously difficult to measure worker effort levels outside experimental settings. But official US statistics measure productivity by the amount of output produced per worker in a given unit of time, lumping together technologies that raise output for a given level of work intensity with technologies that simply raise work intensity. The important distinction between working more efficiently and working harder is invisible.

But a bias towards effort extraction rather than automation would look something like the current pattern—modest rather than surging productivity growth. And research from recent years suggests that digital snitches are having a major impact on work. For example, Gutelius and Theodore at the University of Illinois have presented evidence showing that while technological change in warehouses has introduced some automation, effort intensification and finer-grained algorithmic management of workers have had the more powerful effect.12 Meanwhile Lazear, Shaw, and Stanton, analyzing data on individual worker productivity from a large firm that tracks the output of each individual worker by computer, found that most of the increase in productivity during the years 2006 to 2010 was from increased worker effort. Moreover, effort was higher when local unemployment rates increased, suggesting that worker surveillance tools and the threat of unemployment complement each other—the stick becoming more powerful as workers feel more precarious.13

The rise of digital snitches represents a return to crude, early nineteenth-century models of labor discipline. Rather than enhancing or complementing the skills of workers, or relieving drudgery by automating boring or physically taxing tasks, surveillance technologies help firms squeeze out small, additional increments of effort. Instead of investing in training, or motivating workers with high wages and promises of future raises and promotions, companies rely on intense monitoring and the threat of dismissal. While Amazon workers may fear losing their jobs to robots, a message posted to the warehouse’s digital employee suggestion box, visible in the lobby of the New Jersey facility, expressed a different concern: “piensan que trabajan robots aqui.” They think robots work here.

In recent months Brazilian president Jair Bolsonaro appears to have shape-shifted. From a staunch ally of business interests, he now presents himself as a president of the poor. The basis…

As the arrival of the pandemic forced schools shut, the Public Schools of Robeson County in North Carolina scrambled to save the rural district’s closed and crumbling buildings. At the…

Restarting our economies after the pandemic continues to expose the fragility of our supply chains. The Russia-Ukraine conflict serves as a stark reminder that oil and gas can still dictate…