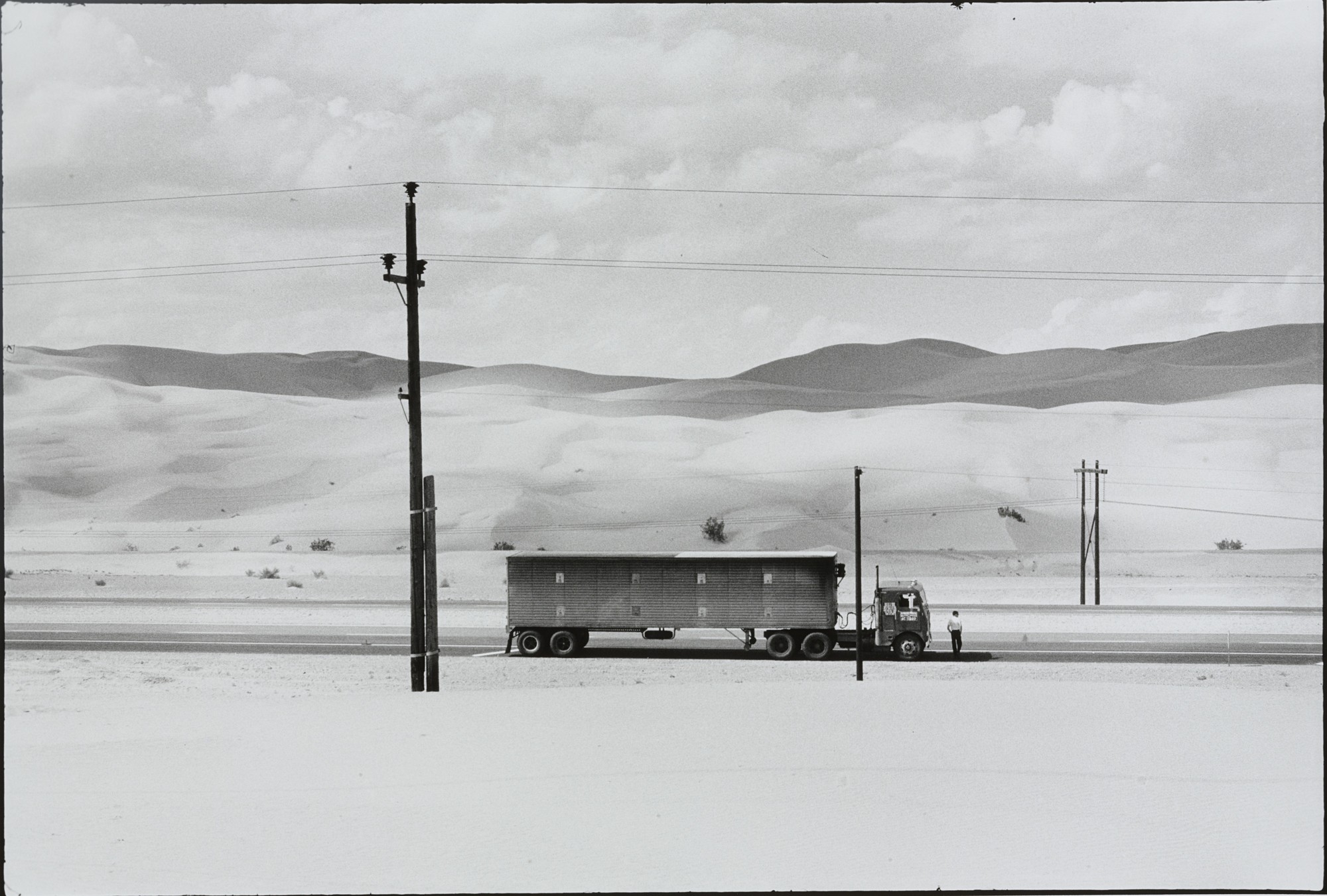 Danny Lyon, Truck in the Desert Near Yuma, Arizona, 1962.

The United Kingdom is in the midst of a protracted crisis in the supply of petrol. In the face of a plummeting sterling and severe disruptions to essential public services, military tanker drivers have been deployed to transport fuel to the country’s 8,380 petrol stations. The lack of truck drivers also led to containers piling up in the UKs most important port Felixstowe, and large shipping companies reroute part of the cargo to continental Europe. On October 1, German news outlet Der Spiegel reported on a “bizarre“ letter sent by the British government to German residents in the UK, asking them to consider work as a trucker. (German drivers licenses issued until 1999 allow drivers to conduct small trucks until 7.5 tons, even if they‘ve never driven a truck.) A similar letter was sent to one million potential truck drivers within the country.

Reports of the petrol shortage tend to focus on the immediate impacts of Brexit—restrictions in trade, and a shortage of essential drivers due to the country’s harsh new immigration rules. By contrast, the Johnson government has continued to extoll the success of rising wages due to tightening labor markets. By centering Brexit, both narratives overlook the deeper causes of the crisis, and the need for extensive industrial reform to remedy them.

Hauler associations had warned the government about shortages of truck drivers as early as 2014. Due to declining wages and standards of work, more truck drivers retire than enter the sector every year. Before the pandemic, 12,500 EU drivers had left the UK as a consequence of Brexit—a large number, but not sufficiently large to induce the current crisis. Due to the pandemic, the number of people who passed tests for lorry drivers fell by 25,000 in 2020. Additionally, the post-Brexit tax change known as IR35 prevented drivers from setting up limited companies to reduce their tax and national insurance contributions, making it more expensive for drivers to work in the UK. The falling pound and anticipated checks on goods at the UK border compounded this effect. But less discussed and more significant are the 50,000 UK based drivers who left the industry as a result of the pandemic and never came back. The flight of these drivers shines a light on the longstanding labor problems endemic in the UK transport industry.

About half of respondents to a recent survey named pay rates and increased resignations as important reasons for the shortfall of drivers. While in 2010, truck drivers in the UK earned 51 percent more per hour than supermarket cashiers, the difference shrank to 27 percent in 2020. Between 2015 and 2021, the median hourly pay for UK truck drivers increased 10 percent, compared to 16 percent across all UK sectors. A 2016 survey similarly attributed resignations to poor wages, poor driver facilities and poor company treatment.

Most drivers leave in their early thirties, since the job is not compatible with family life. While the working time for UK truckers is officially a maximum of ten hours a day (the previous ceiling of nine hours a day was bumped up due to the driver shortage), drivers are often out of the house for twelve to fifteen hours a day, driving to the next pickup location and home. With such long hours, they have only enough time to sleep after work. Added to this are unpredictable shift patterns and frequent weekend work. The low quality of facilities for drivers in the UK compared to many EU countries—dysfunctional showers, low food quality and high prices at highway restaurants—was another persistent issue. Lack of Covid-19 tests and harsh lockdown controls during the pandemic were the last straw which prompted drivers to leave. The resulting labour shortages increased the pressure on the remaining drivers to work longer hours, exacerbating the cycle.

Ironically, by illuminating the reliance of industrial sectors on cheap migrant labour, Brexit and the pandemic have counteracted some of these trends. Supermarkets like Aldi, Tesco and Asda and cooperative retailer John Lewis have raised wages for truck drivers or begun to pay sign-on bonuses. UK Trade Union GMB negotiated a 20 percent pay rise for drivers with delivery company Yodel after 95 percent of union members had voted for industrial action. But while they may cause some drivers to change employers, these measures do not resolve the underlying problems, and consequently they are unlikely to bring drivers back into the market. Just this year, the wages of UK truck drivers rose 20 percent, but the number of truckers did not increase significantly.

Pay rises in some sectors also fail to increase overall income: avoiding a wage-price spiral requires a commensurate increase in productivity. With no plans for industrial investment, no proposals to alter Britain’s brutal anti-union rules, and rigid anti-protest measures in the works, the country’s declining labor standards have the potential to induce future supply shortages in coming months, particularly with Black Friday and Christmas around the corner. At current rates, it will take two years to fill the gap in necessary truckers. In order for new drivers to remain in the sector, the conditions of their work will have to change.

Though the lockdown in 2020 threw many workers out of work, the big fiscal stimulus, fueled by government debt and an unprecedentedly large monetary expansion, offered stimulus checks and elevated…

Before Covid-19 hit, we'd become used to reports about Amazon's robotics innovations and the impending large-scale automation of warehouse jobs. But recent strikes and protests by Amazon's very human workers…

As the American economy reopened in the first half of 2021, reports of a “labor shortage” spread throughout US industries. But there was one sector where employer panic about hiring…