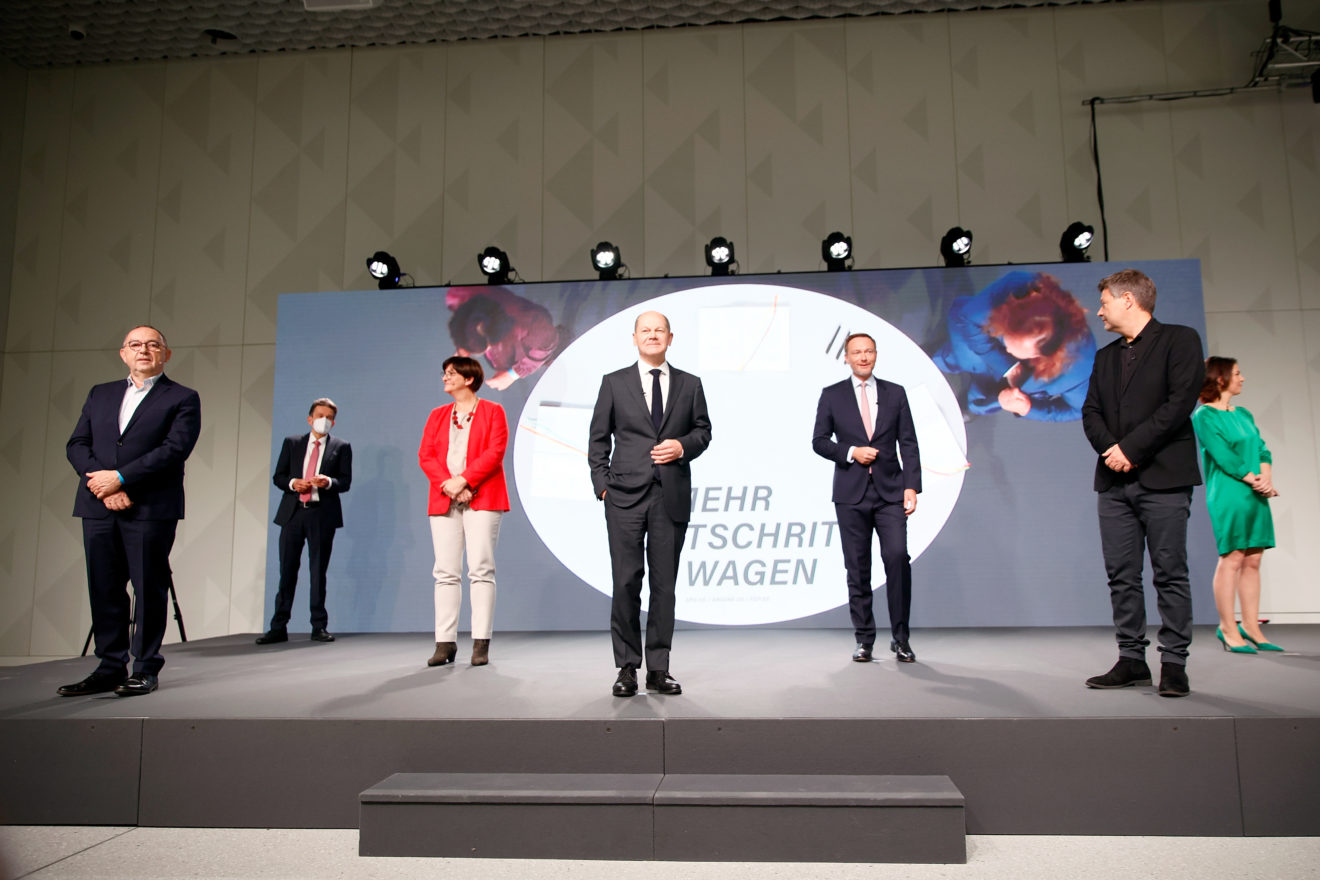 The new coalition government in Germany, led by Social Democrat Olaf Scholz, is the first time that the SDP, the Greens, and the Liberals have joined together in a single government. The cooperation agreement, published on November 24, was the result of months of multilevel deliberations between the representatives of the three parties. In 178 pages, the text summarizes the key issues that will occupy the government over the next four years, including the response to the pandemic, foreign policy, and important legislative issues such as the increase of the minimum wage and the legal framework for gender identity. The coalition partners have declared that they have “Lust auf Neues”—a desire for something new. But the agreement contains two components which indicate a return to the status quo.

The first is the orientation towards state investment. The three-party government intends to significantly increase both public and private investment, particularly in climate protection, digitalization, research, and infrastructure. But, beginning in 2023, public borrowing will return to the tight fiscal limits dictated by the constitutionally enshrined “debt brake,” limited to an annual 0.35 percent of GDP. The German Trade Union Confederation (Deutsche Gewerkschaftsbund, or DGB) and the Federation of German Industries (Bundesverband der Deutschen Industrie, or BDI) both recognize the need for a ten-year plan for public investment and the modernization of German infrastructure. However, each side worries about financing these investments given the tight fiscal margins anticipated in 2023. New inheritance and financial transaction taxes and an increased income tax—proposed in the electoral programs of SPD and the Greens suggested—were abandoned under pressure from the FDP.  The Confederation of German Employers’ Associations (Bundesvereinigung der Deutschen Arbeitgeberverbände, or BDA), which represents the more domestically oriented and less export dependent sectors of German business, praised the agreement (and the role of the FDP) for abandoning tax increases and adhering to the “debt brake.” Approval was echoed by Clemens Fuest, president of the ordoliberal research institute Ifo, who commended the government for refusing to take “the easy way of financing through debt” and instead to “restructure the expenditures.” But divisions among Germany’s ruling elites are made apparent by Finance Minister Christian Lindner’s (FDP) announcement of a 60 billion euro increase in the 2022 national budget devoted to green investments. Lindner has been criticized for leveraging the pandemic-induced fiscal flexibility to push forward unrelated policies.

Second, the government’s moderate position on the Stability and Growth Pact (SGP)—the set of rules designed to promote sound public finances and curb excessive budget deficits among EU member states— has placed them partially at odds with key domestic and international actors. The coalition agreement stresses that “the SGP has proven its flexibility”—meaning it is unnecessary to soften its strict regulations to give the weakest member states some breathing space after the pandemic. In addition, the Recovery Fund remains an instrument limited in time and size, while, as the agreement notes, it is in Germany’s fundamental interest that the reconstruction program brings about a rapid and forward-looking recovery throughout Europe after the crisis.

Following its pre-election position, the BDI criticized the agreement for lacking concrete measures for European investments and the further development of EU fiscal rules. Even though BDA and the Family Companies Association have not taken a position on the issue this time, they have expressed their opposition towards any form of debt mutualization in the past. The president of Ifo also expressed his concerns that the “softening of debt rules” entails the risk of a new round of over-indebtedness in the Eurozone periphery. A new round of bailouts might lead then to the Europeanization of national debt, ultimately putting the burden to the taxpayers of so-called fiscally prudent countries.

Germany’s primary partners in the EU/EMU, Italy and France, take the opposite position. Both economies have come out of the euro crisis weaker, and the pandemic has severely affected their public finances. In a recent press conference, Italian Prime Minister Mario Draghi stated that EU fiscal rules “had already proved to be insufficient since the financial crisis… Today the revision [of the rules] is inevitable.” A similar position was advocated in March by the French Finance Minister, Bruno Le Maire, who argued that “we need rules adapted to this new reality [caused by the pandemic].” The recently signed Franco-Italian Quirinal Treaty confirmed their collaboration. In the Treaty, the two leaders agree that “they will consult each other regularly… before important European events.” Even though Le Maire in his recent meeting with Lindner already relativized his previous calls for more flexibility in EU fiscal rules, saying that new rules are “not urgent” and both sides should take as much time as possible to come to a compromise, the upcoming intergovernmental negotiations on the issue are expected to be highly conflictual.

At stake—in both the orientation towards state investment and its approach to the SGP—is the German export-oriented growth model. With the goal of achieving high international price competitiveness for German products, Germany prioritizes low indebtedness, low inflation, moderate wage increases, low taxation, and access to cheap credit for domestic firms. Preserving this model means avoiding high public investments financed through debt, without which green and digital infrastructure development, and effective competition with the USA and China, are highly unlikely to occur.

These tensions are even sharper with respect to the EMU, particularly given heightened core-periphery imbalances. In the eyes of key figures in the German economic and political establishment, a debt mutualization or permanent Recovery Fund might render EMU a “Transferunion”—former Finance Minister W. Schäuble has already argued that “balanced budgets in countries with high levels of debt are almost unattainable without external pressure.” Nevertheless, a return of the EU to the euro crisis policies that failed on their own terms, resulting in higher ratios of debt to gross domestic product in lower income member states, could be politically and economically unsustainable.

The German economic model and policy framework is therefore faced with some new challenges. While the federal government appears to be balancing sides, a more careful examination suggests that the traffic light coalition has already demonstrated a clear tendency towards a “frugal” stance, especially when it comes to the EU. The new government is far more positive towards the issue of domestic public investments, but it remains relatively modest when it comes to the further relaxation of European fiscal rules and EU-induced state investments. This demonstrates the powerful role that national interest still plays in European integration. While German competitiveness relies on a politically united and economically strong EU/EMU, Germany does not have the will (nor the resources, as it has been rightly argued) to undertake the sort of hegemonic role that would contribute towards the overcoming of the core-periphery structural imbalances.

The new German government will be called upon, at a highly critical time for the global and European economy, to draw up a new economic and political strategy not only…

Some time in 1991 I was invited to give a talk to the Andalusian Confederation of the Spanish Socialist Worker’s Party (PSOE). Afterwards, the secretary of the confederation walked me…

The problem of democratic representation has always turned on the question of the “have-nots”—that is, not only those without wealth and property, but also those marginalized on the basis of…