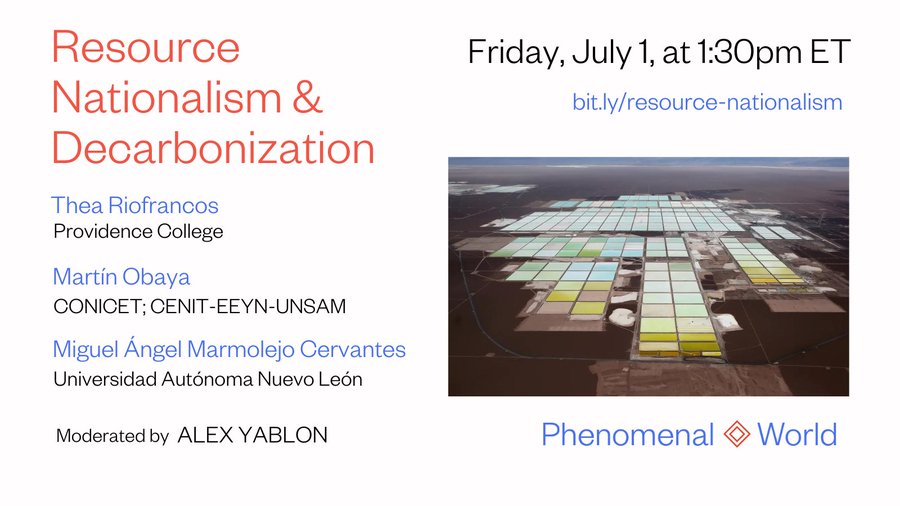 From Mexico to the Southern Cone, a renewed wave of left-wing electoral victories has yielded comparisons to the “pink tide” of the late-1990s and early-2000s. Where that turn took place in the context of a global commodity boom, these recent elections coincide with a surge in demand for minerals essential to the green transition.

The moment has sparked renewed assertiveness by national governments over crucial natural resources, and heated debates over how to balance development goals, global decarbonization, and the needs of communities living on the frontlines of extractive economies—often as polluting and disruptive as the old carbon regime.

Read an edited transcript of the event here, and view the recording here.

There is a position of dependency on foreign capital which constrains state action. But even with this caveat, the most recent nationalizations—not “hard” nationalizations at all—did see a big boon to state finances through the forced renegotiation of contracts, majority stakes, and joint ventures. In many cases, those were invested in ways that met human needs. Putting aside corruption and mismanagement, the overall picture is that many were lifted out of poverty, and much of that was due to resource rents—in my view, that’s a success.

Across Latin America, a recent wave of left electoral victories has drawn comparisons to “Pink Tide” of the early 2000s. The current moment, however, coincides with a global push towards…

Though it failed to resolve a number of contentious issues, the COP26 meeting in Glasgow solidified a consensus around the need for a global transition towards clean energy. Implicated in…

The transition to a post-carbon energy economy will require extraction.