Cows Between the Palm Trees 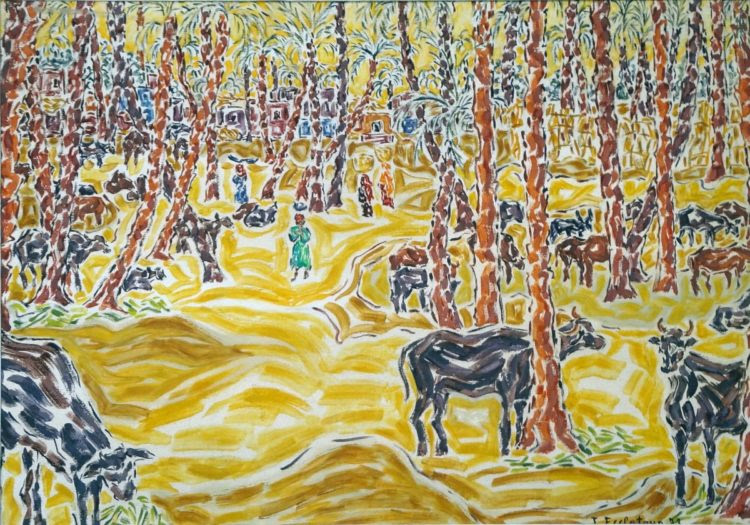 In December 1973, Richard Nixon announced the Emergency Daylight Saving Time Energy Conservation Act as a response to the oil crisis, arguing that making the time change permanent would reduce energy usage with “only a minimum of inconvenience.” Nearly fifty years later, the US Congress is again considering making daylight savings time permanent, with the measure passing in the Senate this week.

Looking at the politics of standardized time throughout the nineteenth and twentieth centuries, a 1972 article by EVIATAR ZERUBAVEL probes how the expansion of US railways shaped standard time zones for the rest of the world.

“Given the tremendous power of the railroad companies in the United States, it should come as no surprise that the movement toward standardizing time originated in the railroad world. Soon after the railway system was introduced to the country, many communities adopted the time of their railroad station as their only valid standard of time. As becomes a rapidly secularizing and expanding society, the railroad station was clearly dethroning the church and the town hall as the nerve center of a standard temporal reference framework. However, while adopting the time of the railroad station was very useful for standardizing time reckoning at a local level, it could not help temporal coordination at the supralocal level, since each community still adhered to its own local time, which was not coordinated with those of other communities.

Each company came to agree on one standard of time (usually the local time of the city where its headquarters or main terminal were located) to be used on all its lines. Thus, the New York Central, for example, used New York time throughout its entire system, while the Pennsylvania used Philadelphia time. While things were relatively orderly at the level of each particular railroad company, the situation was quite chaotic at the level of each particular community. At the train station in Buffalo, for example, there were three different clocks indicating three different time. This involved serious practical difficulties in using the railway system effectively. A far more serious consequence than sheer inconvenience, however, was actual danger. Since terminal traffic was controlled by tight arrival and departure schedules, a difference of a minute or two could actually be the difference between a safe operation and a collision. Thus, in order to promote the effective use of a complex railway network as well as prevent accidents, it became necessary to standardize time reckoning at a level higher than that of the railroad company. The ground was set for a most ambitious project-—the standardization of time reckoning at the level of the entire North American continent. This also entailed the introduction of a new institution—the standard-time zone.”

+  “Year-round daylight-saving time, or ‘war time,’ as it was named by Presi­dent Roosevelt, began on February 9. 1942. Its purpose was to help dissipate evening peaks in the consumption of electric power.” Ian R. Bartky and Elizabeth Harrison’s 1979 article on the adoption of daylight savings time in the US. Link.

+  “When daylight saving time was instituted in World War I, labor further resented the manipulation of what they saw as their customary day.” Charles Maier on the politics of time, wage labor, and the nation state. Link. “The continental United States should adopt “HBO time.'” In a 2020 post, Gabriel Mathy on how to fix US time zones. Link.

+  “The protesters who clung to local Bombay time had harnessed the motivational
forces of urban identity against British rule in India.” Vanessa Ogle compares resistance to standardized time in Bombay and Beirut. Link. And Geoff Gordon examines competing interests and the role of international governance in the establishment of Indian Standard Time. Link.

PhD candidate at the Asia Research Center at Murdoch University, Australia, TRISSIA WIJAYA studies the political economy of infrastructure. In a 2021 paper, she scrutinizes the development of ultra supercritical (USC) coal power plants in Indonesia.

“Since coming to power, the Joko Widodo (‘Jokowi’) government has promoted green infrastructure as a means to boost economic growth, level out decades of uneven developmental gains across the country, and to accelerate action transition to a low-carbon economy. In recent years, a number of large-scale power projects have indeed been developed through private sector – a fusion of foreign and domestic capital. However, rather than renewable projects, USC coal-fired power plants have so far dominated the FTP’s list. I examine the contradictory development of ‘green’ projects in Indonesia and specifically unpack: how transnational politico-economic forces have secured a stable sustainability fix for the USC and how they have tamed opposition forces and reshaped governance strategies for intensified accumulation. I attempt to empirically demonstrate how such process unfold through two case studies – Cirebon II developed by Japanese and Korean companies and the Java 7 project funded by China. Albeit each have different alliance formations and strategies, both cases demonstrate that the safeguarding of stable conditions for sustainability fixes of USC power plant development is primarily determined by contestation, conflicts, and compromises between socio-political forces – international fractions of capital, state apparatuses, Indonesia’s PLN and coal oligarchy as well as broader civil society actors. They reshape governing strategies that are ultimately organised through the Indonesian state and react to the selectivity of state strategies which privilege dominant forces.”

+   Join JFI on Friday, March 25 at 10 am ET for a discussion on Ethiopia’s Integrated Housing Development Programme: a plan to build hundreds of thousands of state-subsidized condominiums to confront rapid urbanization in Addis Ababa. The discussion will center on a forthcoming report by Naomi Zewde and Vivian Schwab analyzing the scale and success of the project, and feature Emanuel Admassu, Brook Haileselassie, Miriam Hillawi, and Areej Al-Musalhi. Register here.

+   Swati Srivastava on the East India Company’s “company-state” and the development of modern state sovereignty. Link.

+   “I have long argued that commodity traders don’t matter to the global economy in the same way that Lehman Brothers did: the collapse of one won’t trigger a global recession. And yet, they remain too big to be ignored — and a possible source of big trouble if left unattended.” Javier Blas on turmoil in commodity markets. Link.

+   “This article puts together the first comprehensive account to date of what appears to be publicly knowable about the nature and scope of U.S. banking organizations’ physical commodities activities.” A 2012 paper by Saule Omaraova on financial firms and commodity trading. Link. And Adam Tooze’s Chartbook on the fallout of the Russia sanctions in commodity markets. Link.

+   “Treaties may be interpreted in light of a State’s obligations concerning human rights, environmental protection, and Indigenous peoples, giving legal form to the pursuit of supply chain justice in the energy transition.” Oliver Hailes on international law in the lithium industry. Link.

+   “The central bank freezes have irked him more than the announcement of European weapon deliveries to Ukraine.” Dominik Leusder on the Russia sanctions. Link. And, last week on PW, Edoardo Saravalle on the same. Link.

+   Nathan S. Balke, Xin Jin and Mine Yücel quantify the impact of the shale revolution on oil markets. Link.

+   A study of a 2016 New York City intervention which randomly made 2,428 initial primary care appointments for undocumented immigrants found a 21% fall in emergency department use for participants. Link.

+   “The end of the American Civil War brought the end of slavery, but it did not bring the end of the Southern planters. Using data from Texas, we show that former slave owners made up more than half of all state legislators until the late 1890s. Legislators with slave-owning backgrounds were more likely to be Democrats and voted more conservatively even conditional on party membership. A county’s propensity to elect former slave owners was positively correlated with cotton production, but negatively with Reconstruction-era progress of blacks. Counties that elected more slave owners also displayed worse educational outcomes for blacks in the early twentieth century.” By Luna Bellani, Anselm Hager, and Stephan E. Maurer. Link.