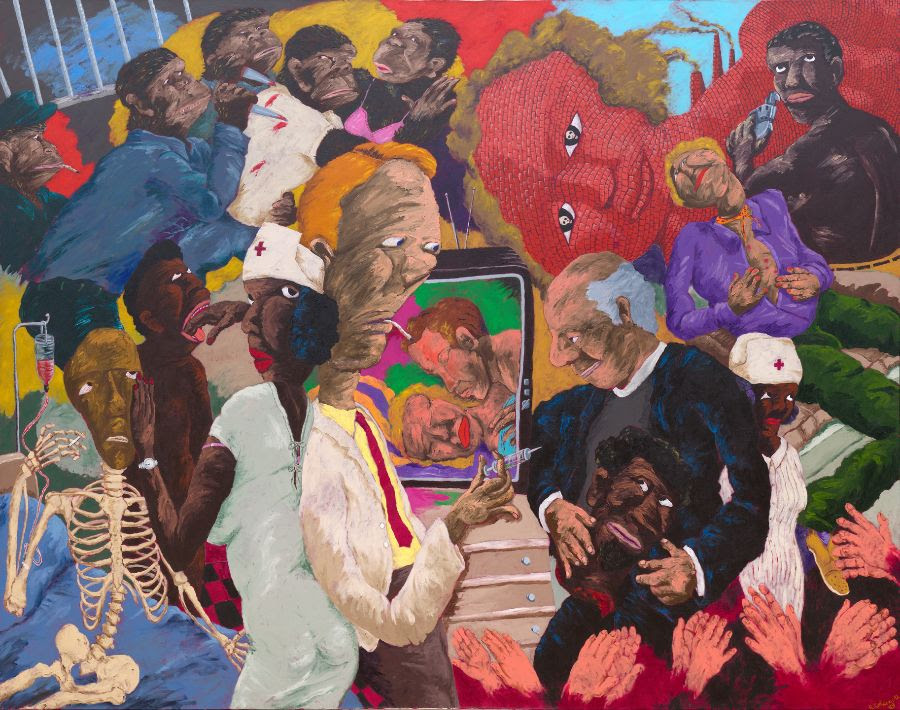 In recent months, the UK’s rising living costs and stagnant wages have given rise to a series of strikes across railways, hospitals, and Amazon warehouses.A 1995 article by BEVERLY SILVER considers the relationship between labor unrest and economic cycles, drawing on a database of global labor struggles from 1870 to 1990.From the piece:

We could try other statistical methods or play with changing the dating scheme in order to see if a clearer relationship between labor militancy and long waves can be elicited from the data. However, one look at the indices of world-scale struggle graphed over time makes clear that any such attempt would be misguided. The overwhelming influence on the series are the two world-wide waves of struggle that take place after each of the two world wards. Any relationship between economic cycles and labor unrest is buried beneath the far stronger relationship between world labor unrest and world wars.”

+  More from Silver, on strikes and social turmoil: “The assumption that strike statistics will always reflect escalations in the forms of conflict beyond the strike seems unwarranted.” Link. And in a 1989 paper, Roberto Franzosi examines the deficiencies of official strike statistics. Link.

+  “The graph of the membership of virtually every trade-union movement looks like a series of sloping steps, or of broad valleys broken by sharp peaks, or a combination of both; very rarely is it a mere rising slope.” From 1952: Eric Hobsbawm on the fluctuations of social movements since 1800. Link.

Safya Morshed is a PhD student in economic history at the London School of Economics. Her research examines the development of state capacity in Mughal India through the lens of social conflict.

In a recent blogpost, she examines the empire’s political stability in light of changing weather patterns.

“Mughals attributed famines to increased political instability after the 1650s, where the movement of troops could result in raids and crop destruction. But climate historians have noted abnormal weather patterns between 1600-1670, with especially poor weather around 1630. If peasant rebellions increased more in the 1630s than 1650s, then it is more plausible they did so because of climate.
I developed datasets for peasant rebellions and famines. Using centralized, contemporary state histories, I recorded the number, size, type, and date of conflicts which from 1555 to 1680. The timeline suggests that the inhospitable climate of the seventeenth century initiated the spate of peasant rebellions, which prevented revenue collection for an economy quite dependent on agrarian taxes. Moreover, for a state that was increasingly engaged in larger conflicts with enormous armies, peasant flight made it difficult to feed soldiers during times of war. Famines also triggered peasant migrations, leading to structural changes in the economy.”

+   “I situate the place of law in colonial South Asia through the formation of property law for coal at the end of the nineteenth century.” Matthew Shutzer on the legal impacts of the coal commodity boom of 1894. Link.

+   “We empirically characterize how China is internationalizing the Renminbi by selectively opening up its domestic bond market to foreign investors and propose a dynamic reputation model to explain this internationalization strategy.” By Christopher Clayton, Amanda Dos Santos, Matteo Maggiori, and Jesse Schreger. Link.

+   “This article shows how Milton Friedman’s negative income tax proposal hollowed out redistributive considerations from the hierarchies of needs, notions of duty, or conceptions of citizenship and replaced them with a monetary conception of poverty.” A new article by Daniel Zamora Vargas examines the New Deal origins of the NIT. Link. (h/t Luke H.)

+   “The emergence of early cities in the southern Mesopotamian alluvium must be understood in terms of the unique ecological conditions that existed across the region during the fourth millennium, and the enduring geographical framework of the area, which allowed for the efficient movement of commodities via water transport and facilitated interaction between diverse social units alongside natural and artificial river channels. By the final quarter of the fourth millennium the social and economic multiplier effects of trade patterns that had been in place for centuries had brought substantial increases in population agglomeration. Concurrent with these increases, and partly as a result of them, important socio-economic innovations started to appear: (1) new forms of labor organization delivering economies of scale in the production of subsistence and industrial commodities to southern societies, and (2) the creation of new forms of record-keeping in southern cities that were much more capable of conveying information across time and space than simpler reckoning systems used by contemporary polities elsewhere. These innovations help explain why complex regionally organized city-states emerged earlier in southern Iraq than elsewhere in the Near East, or the world.” Guillermo Algaze on “The Sumerian Takeoff.” Link.