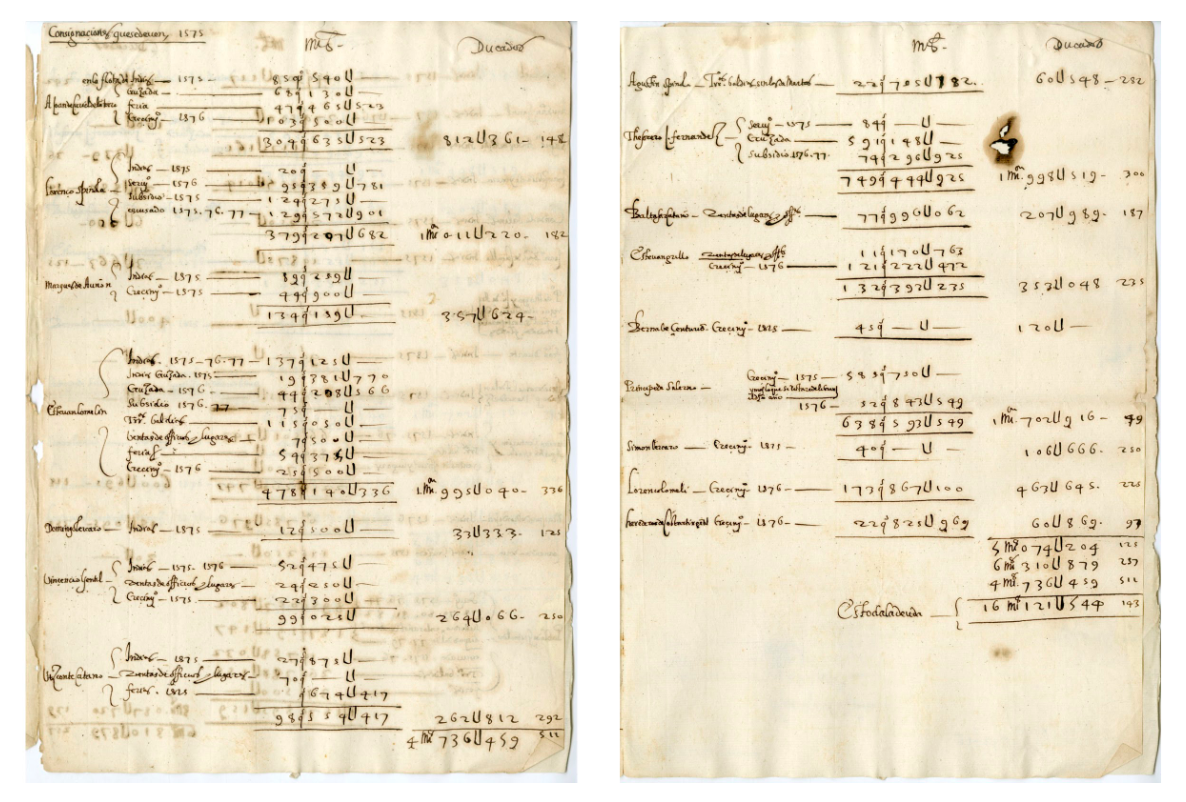 An internal memorandum from 1575 listing consignatories to asientos. Note the mention of two members of the powerful Genoese Spinola banking clan: Agustin and Lorenzo. Courtesy of the Hispanic Museum of America.

How Medieval Financiers Lent in the Age of Uncertainty

​In 1596, Spanish troops under the leadership of the Duke of Medina-Sidonia set fire to their own ships in the waters near Cadiz. The sinking of these thirty-two vessels was a tactical necessity: a joint Anglo-Dutch navy had annihilated the slapdash defenses of the city, driving the Spanish ships off to nearby Puerto Real. The Spanish had preferred to see their ships sunk rather than captured by the enemy. Cadiz itself was occupied and sacked, and its most prominent civilians were held for ransom. War, as the Spanish were acutely aware, was very costly. Later that very year, Philip II, King of Spain, would declare bankruptcy.1

Though he was one of the most powerful monarchs of the era, it is difficult to sympathize with the sheer magnitude of the work with which King Philip II of Spain had to contend. Not only did he have to protect his Iberian possessions, but he also had to prosecute a war against the recalcitrant Dutch in the Low Countries, outmaneuver the Protestants in France, and maintain a bulwark against the Turks in the Mediterranean.2

In their book, Lending to the Borrower from Hell, Drelichman and Voth have done a remarkable job of illuminating Spanish finance in the 16th century. Notably, the fiscal machinery underpinning imperial operations was managed mostly by a tight-knit cartel of Genoese bankers. Sovereign lending, astonishingly, allowed for a plethora of state actions in a time before instant communication. The foundations of empire rested on a relatively simple model: control certain streams of income and then borrow against them. The institutional origins of our modern sovereign lending come from this tradition. Dealing with uncertainty is an inherent part of this model – now as it was then. What is of use to modern scholars is how the same problem was conceived of and partly surmounted by our institutional forebears.

​As far as the history of technology goes, financial instruments are perhaps the unsung hero of the past. By the 16th century, sovereign financing already had a long history in Europe. King Edward III of England borrowed heavily to finance the Hundred Years’ War. Before him, King Philip the Fair of France borrowed from the Templars. The Burgundian court under Charles the Bold swapped tax farms for ready cash. Though these rulers came from different places and different times, there is one thing they have in common: they all defaulted on their sovereign debts.3

Indeed, just as sovereign debt financing and credit-based war financing had been an old tradition in Europe, so had defaulting on these loans. The defaults would summarily render the lenders insolvent. However, by the time of Philip II in the mid-16th century, something seemed to have changed. The Genoese bankers managing his finances did not buckle under the weight of the four defaults during the king’s reign. Rather, they continued to lend and even made a hefty profit despite the defaults.

​What is remarkable about lending in the Medieval and Early Modern Eras is the lack of precise estimates. For instance, as Puttevils and Deloof write, maritime insurance underwriters in 15th and 17th century Antwerp relied on “experience, intuition, convention.” The modern era up until at least the Great Recession of 2008 is marked in its obsession with predictions, forecasts, and an imprudent self-assuredness in its own faux omniscience. Nassim Taleb’s conception of fragility versus antifragility and robustness is useful here. The Genoese could not have conceivably predicted the specific set of causal variables that led to a default by Philip II. Tiny, often unobserved variables led to large fluctuations in the appetite for credit or revenues to support credit payments. Whether it was adverse trade winds delaying a treasure fleet, the loss or victory of a crucial battle in the Low Countries, or an unpredicted raid on Iberian soil, a large set of variables could radically alter the course of the royal balance sheet on short notice.

​These events, which are so shrouded in Knightian uncertainty—risks that cannot be calculated—are what Taleb calls Black Swans.4 The Genoese banking cartel is interesting in that it employed a set of financial and organizational innovations that allowed it to lend in a highly uncertain environment, managing the fluctuations in the king’s willingness to pay rather than attempting to predict myriad causal variables. This small set of financiers managed to lend in a time before precise estimation.

​Since the fall of Rome, the medieval world had come up with a variety of financial innovations. Many of these innovations, it so happened, were pioneered in city-states (namely northern Italy or the Low Countries). Though deposit banking would emerge in the 13th century, notarial systems that underpinned lending seemed to have been in the works since the 5th century. In this early stage of finance, banking arose from moneychanging. Indeed, by at least the 14th century, banking would be tied to foreign exchange markets.5 Early banking itself, then, was based on the uncertainty of exchange rate fluctuations. Yet the concept of “prediction,” at least in the modern sense or precise estimations with margin of errors, was absent from the medieval worldview.6 So then how did they do it?

​The Medievals developed a number of tools to manage large and sudden changes in cash flows from investments. These tools form the backbone of many modern lending practices. The Medievals had some sense as to how stable certain streams were in relation to others. Export tariffs, for instance, were much more reliable a source of revenue than, say, plunder or treasure ship arrival. Rather than merely stipulating that the lender ought to pay back however he could, medieval financing was closely tied to particular income streams. These very streams were sometimes collateral in case repayment went awry.

​The Riccardi of Lucca had such an arrangement with Edward I of England in the 13th century, as would the Medici agent in Bruges with the Duke of Burgundy nearly two hundred years later. Some scholars even posit that the requirement for steady income (in the form of a tariff system) emerged because such streams were a requirement to be cleared for a loan.

​The Genoese—and other sophisticated investors throughout Europe—in the time of Philip II of Spain had an ordinal (but not cardinal) preference between streams. Consequently, individual loan contracts to Philip II contained a slew of different conditions, each changing the terms of the loan based on the outcome of certain events. If the treasure ships were delayed, for instance, then a different income stream would be used.7 The Genoese were especially adroit in swapping between certain instruments with others as default risks loomed. What is of note here is that the Genoese, due to their physical proximity with the royal court, possessed information (and preferential treatment) relating to financing the bonds compared to the rest of Europe. They made expedient use of arbitrage to reap more profits and hedge against volatility in crown repayment.8

​Another tool was the advent of securitization of investments into several shares. The Genoese made widespread use of this: they would cut up loans into several pieces and selling the shares in market fairs throughout Europe.9 A single Black Swan event, then, could probably not have wiped out an entire portfolio. The Dutch would use the same concept to fuel later investments. However, this also implied that the European credit system was increasingly integrated—a loss in payments in Spain was no light matter, and many downstream investors would be caught in the fallout. This was a natural evolution of the earlier societas form of banking partnerships: merchants would unite and split up profits as per their shares of equity in the commercial union. A merchant that invested fifty percent in a partnership, for example, would receive 50% of the profits from the venture. This would eventually culminate in joint-stock companies, especially during the 17th century.

​The Genoese also acted in concert to ensure that the King could not behave with utter impunity.10 Financial and logistical innovations were “technological” forces at work that made the Genoese able to handle Black Swan events. The lending coalition, on the other hand, represents an institutional innovation. This is akin to Taleb’s “convex transformation”: they have crucially modified the likelihood of repayment such that the factors influencing repayment become as irrelevant as possible. For financiers, trade winds affecting mercantile voyages or Anglo-Dutch privateering events on the far side of the world are near impossible to predict. But they could control for variation in debt repayment. This is no easy feat, especially given the fact that Italian financiers often held no powerful positions themselves. Influence at court had to come from institutional cohesion—the bankers would act as a single bloc in the event of any payment stops, cutting off the King’s line of credit. Such a stall in funds could spell catastrophe for the stretched empire, and eventually some kind of deal would be negotiated.

​International medieval banks before the Genoese cartels, on the other hand, apparently did not possess such embargo powers.11 The Medici bank’s branches in Bruges and Lyons were in turmoil by the end of the 15th century. The Riccardi that lent to Edward I of England would collapse after their tax farm was retaken by the state and their assets sequestered in France. It is unclear why even a large juggernaut such as the Medici bank was unable to interact successfully with the various sovereigns.12 Predecessor banks (up until the Medici) also maintained a centralized structure in which a central bank operated in Tuscany, but agents, not partners, managed other branches. The Genoese and the Medici, on the other hand, operated in a series of joint, interlocking partnerships, though the former resembled more so a matrix of firms, whereas the latter resembled a single firm with many junior partners. However, whereas the Genoese were advantageously integrated—to some extent—into the Castilian court, Medici branch managers would even abandon their Italian partners and “go native”, essentially accepting local posts in exchange for privileges. The paradox of these earlier banks is that sovereign lending still went on; and by the 16th century, the Genoese would not be as fragile as their predecessors.

​The fragile institution is wiped out by sudden payment stops. The Genoese banking institution anticipated and accounted for it. Given the modern proclivity towards predictions, it is remarkable that a small group of savvy financiers from a more “primitive” era were able to make profits. There is a certain degree of bravery—and love of profit—that is required to lend to kings.