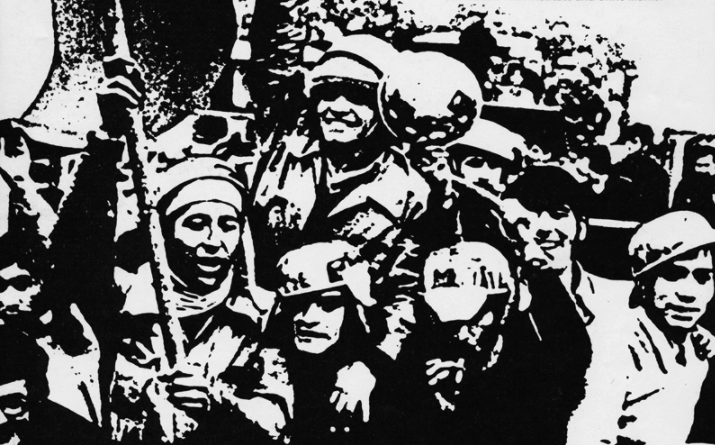 From the poster for Patricio Guzman’s The Battle of Chile.

In October 2019, a proposed thirty peso hike in public transport fares triggered protests in Santiago that spread to other major cities across the country, denouncing the country’s economic infrastructure with the slogan, “It’s not thirty pesos, it’s thirty years.” Chileans took to the streets to protest political corruption, the rising cost of living, the privatization and commodification of education, health and pension systems; and the privatization of natural resources like copper and water. While Pinochet’s dictatorship ended thirty years ago, its constitution still governs the country. A resurgent feminist movement and the reignition of the historical struggle between the Indigenous Mapuche and the state also contributed to this wave of unrest.

In the two years since, Chileans have voted overwhelmingly in favor of a new constitution and given a large mandate to the left to shape the new constitutional convention: Left-wing electoral coalition Apruebo Dignidad (Approve Dignity) and their independent allies won nearly 80 percent of the seats on the Constitutional Convention, while Indigenous rights activist Elisa Loncón was elected its president. This wave of political energy has carried former student-protest leader and current MP Gabriel Boric into the final round of the presidential runoff, which is scheduled for Sunday, December 19. The stakes are high in Sunday’s election. Boric will not face off against either of the two centrist parties that have ruled Chile since its transition to democracy. Instead, having won the first round of the presidential election with nearly 28 percent, Boric’s opponent is the far-right candidate José Antonio Kast.

After a series of progressive victories over the past two years, all focused on dismantling Pinochet’s legacy, Kast’s success is puzzling. How is it that a candidate keen to associate himself with the dictatorship is so close to the presidency? Central to Kast’s campaign is the integration of neoliberalism and neofascism: economic freedom and political order, a combination that gains potency against the backdrop of instability which has characterized the country’s recent political history.

“If Pinochet were alive, he would vote for me”

José Antonio Kast is a lawyer and politician who spent sixteen years in Chile’s Chamber of Deputies serving the conservative Independent Democratic Union Party before resigning to form the new Republican Party. His father Michael was a conscripted soldier and member of the Nazi Party in Germany who fled to Chile after the Second World War. His elder brother, Miguel Kast, was one of Milton Friedman’s Chicago Boys, trained in free market economics at the University of Chicago before returning to Chile to serve under the military dictatorship of General Pinochet, both as president of the Central Bank of Chile and as labor minister—two key posts in the country’s failed experiments with neoliberalism.

Kast and his supporters openly embrace their connection to Pinochet’s dictatorship. Kast said during the 2017 campaign, “if [Pinochet] were alive, he would have voted for me,” and his supporters now close his rallies with chants of “Viva Pinochet.”

Kast has also formed relationships with far-right leaders in Latin America, the US, and Europe. He has spoken of building a coordinated network of anti-leftist governments across the continent to “identify, arrest and judge radicalized agitators.”

Much like Bolsonaro and Trump, Kast has mobilized violent anti-immigrant sentiment, railing against those arriving to Chile from Haiti and Venezuela. He may not be in office, but his rhetoric has already had consequences. In September, anti-migrant violence exploded in the northern town of Iquique, where a far-right march jeered homeless Venezuelan families before burning their belongings. Were Kast to be defeated next week, he would have already left a mark on Chilean politics.

“Chile is out of control”

There have been abundant analyses explaining Kast’s success in light of the country’s recent economic trajectory and demographic trends. Without doubt, the precarity and instability generated by the extensive history of privatization and liberalization in the country form some of the foundation for both Kast and Boric’s appeal. But Kast’s ability to mobilize support lies in the historical roots of his rhetoric, and his promises of economic freedom and so-called political order represent a marriage of neoliberal and neofascist politics.

Following his victory in the first poll, Kast promised to “recover peace, order, progress, and our freedom.” These political values are contrasted with the violence, terrorism, and delinquency of social movements, the Mapuche conflict, and recent waves of immigration. Kast’s politicization of order and violence is tied with a highly individualized notion of freedom: freedom to choose which schools your children will attend, which job you will work, and where to invest your money. These freedoms are placed in contrast with free public provision, or solidarity schemes for public services—hallmarks of Boric’s campaign—which are perceived as limiting freedom. This is a vision of freedom that paints society as a series of dictatorships: the “sanitary dictatorship” that aims to control the spread of Covid-19, the “media dictatorship” that aims to block right-wing views, and the “cultural dictatorship,” an analogue to panic over cancel culture. In a recent interview, Kast declared, “It is time to finish with this sanitary dictatorship which is suffocating entrepreneurship, killing businesses, blocking learnings and stagnating the country. No more quarantines, no more state of exception. Freedom and responsibility now.”

On the other end of these appeals to freedom is the strong and expansive state required to enforce political order. On December 10, Kast declared the need for his own “State of Emergency” that would grant the police new powers to restrict freedom of movement and assembly, intercept communications, and arrest and detain people in their own homes. The proposals exceed what might be considered a more typical conservative authoritarianism, as Indigenous people, migrants, and refugees are particular targets of Kast’s expansion of the military state. He has credited the US’s Immigration and Customs Enforcement (ICE) as the inspiration for the creation of a new police organization. Meanwhile, Chile’s current Anti-Terrorism Law would be expanded to permit new “special investigation techniques,” particularly targeted at the Mapuche in the south. Kast also proposes to transform the role of the National Human Rights Institute (INDH), disbanding it in its current form and developing a new organization that will go after Chileans who are guilty of “aggressions against the police.” He plans to remove controls over the military and police, in particular denying the oversight role of international organizations such as the UN’s Human Rights Council. Kast’s plans are clearly inspired by the Pinochet dictatorship, a regime whose human rights record he has praised, claiming that, in Chile, “political opponents were not locked up.”

Animated by the Communist Party’s support for Boric’s campaign, communism has come to embody the “political other” against which Kast’s order is imposed. For instance, Kast and his supporters often characterize Boric’s pension reform as the expropriation of savings, equating the latter’s political project with the loss of individual rights and the crisis of private property. There are historical resonances here: By positioning himself as a successor to Allende early in his campaign, Boric also evoked the memories of chaos associated with the regime’s collapse in 1973. Kast’s supporters in turn respond to the memory of the “order” that the dictatorship brought following the coup, and are nostalgic for the stability associated with the democratic transition under Pinochet’s constitution. The memory of Allende, as either the antithesis to freedom or the very embodiment of it, remains salient in the present standoff.

The categories of peace, order, and freedom are meaningful in part because of their historical legacy. But for whom are they meaningful? At first glance, Kast’s voters are more likely to be older, richer, male, and educated. While his support is strong in villages, small towns, and the regions, he has also had success in northern and central urban areas. The variation means it is difficult to understand Kast’s success simply through social stratification and demography. His political project has been activated in a multifaceted way, with a malleability that appeals across social divides.

Some of Kast’s supporters are determined to preserve their position in a privatized system of benefits—those with stakes in the private pension system, for example, fear its nationalization. For rural farming communities, the perceived threat comes not necessarily from public benefit provision, but changing social norms (see Kast’s defence of Rodeo, a national sport questioned by Boric for animal abuse) and consumer behaviour that threatens their way of life. Kast’s attack on the vegan dairy-substitute company NotCo spoke to those fears. Kast has also secured some urban voters, particularly where a perceived lack of order has emerged: in the North, in small cities with high rates of immigration and, in the South, where the Mapuche conflict has been unfolding. (Notably, urban voters in Santiago, which has experienced the highest immigration rates and the most pitched social protests, vote overwhelmingly for Boric.) For some in the political center, Kast represents a regression—but is the price to be paid to avoid communism.

While he appears to be drawing support from across class, age, and geography, Kast’s supporters share an investment in the country’s existing political infrastructure and a fear of sudden change. Thus, beyond fears of communism or nostalgia for Pinochet, Kast’s discourse resonates with popular perceptions of progress through effort and sacrifice. Common among these voters are values of meritocracy, individual freedom, and freedom of choice.

Sunday’s election is hugely consequential for Chile’s future. The election of Kast would be a catastrophic blow for the working class and racial minorities in Chile. Kast’s pursuit of an agenda of neofascism and neoliberalism, combined with a political rhetoric that has appealed to those with experience of historical political turmoil, spells disaster for the wider region. But at the other end of the spectrum there are millions of Chileans mobilizing around questions of dignity and collective welfare in the reshaping of the constitution. Recent days have seen both candidates signal a willingness to moderate in pursuit of votes, yet the gulf between the candidates couldn’t be wider. The election still represents a struggle to define the hegemonic narrative of Chile’s future—order, or equality?

The new German government will be called upon, at a highly critical time for the global and European economy, to draw up a new economic and political strategy not only…

Throughout the 20th century, radical social movements were plagued by their relationship to existing state institutions. Across Western Europe, labor movements found political expression in parties like the Swedish Social…

In The Takeover of Social Policy by Financialization, Lena Lavinas names the “Brazilian Paradox”: the model of social inclusion implemented by the Workers’ Party under President Lula and President Rousseff…