Europe’s “Leap Into the Future” 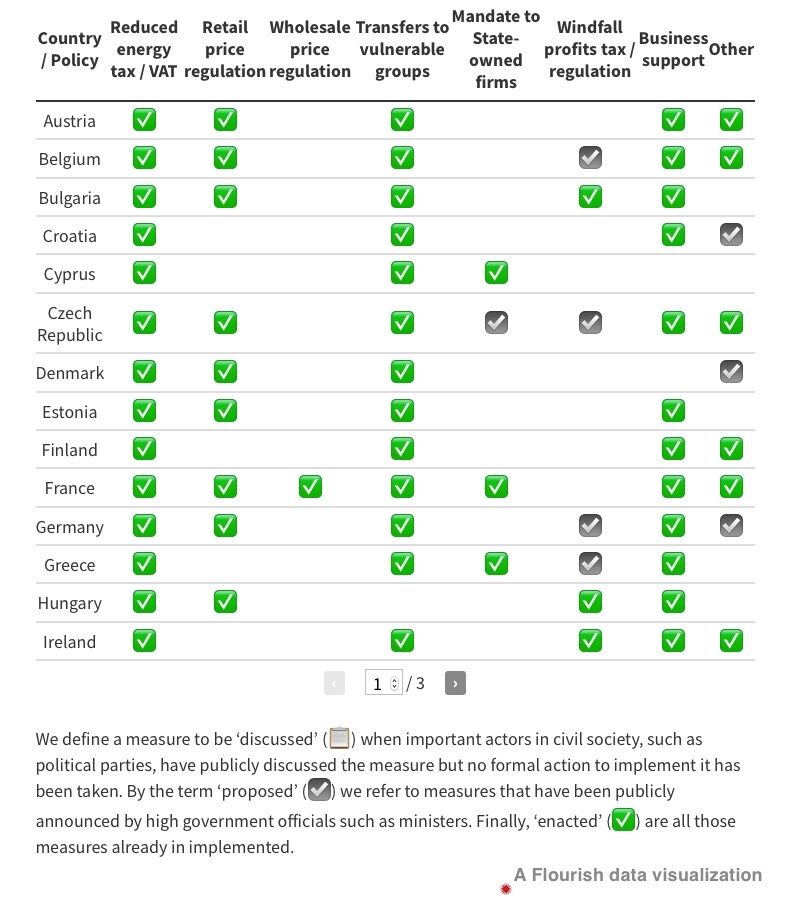 In 2020, as demand for liquefied natural gas boomed in Asia, the shippable fuel was an afterthought in Europe. But when Russia’s invasion of Ukraine in February 2022 imperiled the continent’s energy supply, Europe panicked and spent the intervening year loading up on gas.

Now, a balmy autumn and mild winter plus demand restraint have made it likely that the continent gets through the coming months with economic woes but not a full-blown energy crisis. Europe entered December having outbid Asian buyers for LNG cargoes and with gas inventories brimming. Incredibly, manufacturing output—once expected to be the first casualty of the energy shortage—is up. Running industrial production hot and substituting away from gas will help shift the continent onto a more energy-independent trajectory in the long term.

But it was not long ago that the prospect of rationing and regional blackouts had German officials quaking in their boots. The energy crisis lobbed grenades into the EU’s battles over state aid and its restrictive fiscal rules. Over the past six months, European countries have nationalized utilities, plowed money into green investments, and taxed the windfall profits of energy companies. Policies like price caps, ridiculed by the bien-pensants months earlier, are on the verge of being state policy.

Many of the moves are temporary—hurriedly developed and justified as emergency response measures—but they set precedents for which tools count as legitimate. Increasingly frequent crises in the material world can open up new political pathways.

Space for the periphery

Nowhere are these dynamics clearer than in Europe’s problem child: Greece. Through November of this year, Athens spent 5.7 percent of GDP, or over €10 billion, to protect households and businesses from rising energy prices. That puts it close, as a share of GDP, to Germany’s unrivaled 7.4 percent spent on subsidies.

Given the fresh wound of the bond crisis—when the EU Commission, European Central Bank, and IMF forced Greece to run a primary surplus for years amid 50 percent youth unemployment—such a cushion for ordinary households facing a cost of living spike is nothing short of extraordinary. The government, which faces an election year in 2023, pledged over the summer to absorb more than 90 percent of the rise in power bills for households, and around that number for farmers and small businesses. In November, it imposed a tax rate of 90 percent on windfall profits of energy companies. If fiscal austerity was the story of the Eurocrisis, the energy crisis has been met with a more socially prudent policy response. While expenditures for energy users do not yet signal a decisive shift towards fiscal expansion—subsidy funds were drawn from Next Generation EU funding—the sheer size of the outlay is significant.

Last summer, facing sweltering heat and mounting anxiety over low gas supply for the coming winter, France announced that it would spend $10 billion to nationalize electric utility Électricité de France (EDF). In a statement by the Finance Ministry (presented by Goldman Sachs and Societe Generale), the French government explained that the move would allow it to “commit to long-term projects that are sometimes incompatible with the shorter-term expectations of private investors, without being exposed to the volatility of equity markets.”

Whether or not securing the roughly 14 percent of stock in EDF that the government didn’t already own makes a material difference in France’s energy sovereignty, the move is in line with a series of other nationalizations. In Italy, Prime Minister Giorgia Meloni just passed emergency legislation making it easier for the government to take over key energy infrastructure like power plants and pipelines.

The biggest of these nationalizations is in Germany, where the government now controls the gas company Uniper after a 15 billion euro rescue package proved inadequate. Berlin had to change its domestic laws to allow nationalization and took a 99 percent ownership stake in the too-big-to-fail company that went bankrupt after its failed bet on Nord Stream 2.

“There might be more of this,” European Investment Bank President Werner Hoyer told Bloomberg, “because in view of the incredibly high energy prices which cannot be passed on to the consumers the states must come in.”

Rules for thee but not for me

Germany sees the monster it has unleashed with these extraordinary policies, and is now trying to rein it in. Having pledged a €200 billion energy package for its own citizens, backed in part by new borrowing, the country is now insisting that it will oppose further joint EU debt issuance, or any softening of fiscal rules that would enable other countries to raise debt. That’s over loud calls from other member countries, the European Commission, and even the IMF for more joint debt issuance.

Strict constitutional rule prevents Berlin from running a budget deficit. This is the so-called Schuldenbremse, or debt brake, which Germans circumvented in 2020 by declaring a state of exception. Now, the German finance ministry is rejecting the French push for a low gas price cap, arguing that without a freely moving price signal Europe will underbid Asian buyers. Joining Germany’s bid to let prices rip is Europe’s biggest gas supplier, Norway, whose treasury is raking in its highest-ever hydrocarbon revenues from the pockets of fellow Europeans.

Societies boil when the price of essentials like energy and food soar. Fearing blowback, politicians are now spending money into voters’ pockets. But inflation has already exacted a toll on incumbents—Macron’s party was unable to win a legislative majority in parliament, and only a third of French are willing to keep bearing the economic costs of the war. Mario Draghi, key champion of the sanctions escalation, warned that inflation “can wear down the commitment of our countries toward Ukraine.” Indeed, Draghi lost his Italian premiership and was replaced by the far-right Meloni. After a drubbing in Germany’s state elections, the liberal FDP, long uncomfortable with the SPD and Greens interventionism, has vowed to stop “left-wing projects [from] being implemented in this coalition.”

Will the present state of exception draw to a close? We are entering an era when the EU will be battered by repeated shocks and social upheaval. There are worse things in a democracy than politicians acting to save their skins. Europe’s austerity and free-market wing condoned  enormous fiscal intervention amidst plague and war, but these moves set a precedent for governments to actively take charge in future crises.

“Europe will be forged in crisis, and will be the sum of the solutions adopted for those crises,” EU founding father Jean Monnet famously said. The polycrisis is not just one thing. It’s one thing after another. Europeans are already gearing up to compete with the United States’s recent protectionist policy escalation. Facing a potentially wickeder winter in 2024, “sovereign Europe” appears to be firmly on the agenda. As material crises pile on each other, exceptional policy will follow.

At COP26, US Special Envoy for Climate John Kerry sanguinely declared the need to “de-risk the investment, and create the capacity to have bankable deals. That’s doable for water, it’s…

The conclusion of COP27 reflected persisting uncertainties around coordinated global action towards decarbonization. Major agreements—including the establishment of a loss and damage fund—were reached, but the burden of mounting debt…

This essay first appeared in GREEN, a journal from Groupe d’études géopolitiques. In March of this year, as Russia’s war in Ukraine intensified, China’s Foreign Minister Wang Yi made a…