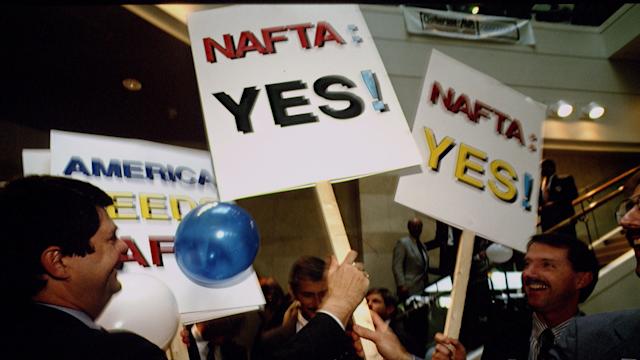 According to a survey on free trade from the University of Chicago, economists overwhelmingly agree that the net effects of free trade are good. A recent article by several  IMF economists affirms that, “perhaps more than on any other issue, there is agreement among economists that international trade should be free.” Free trade is said to enhance efficiency in all participating countries, which can lead to higher productivity and higher rates of economic growth. These higher growth rates can, in turn, raise living standards and therefore represent a desirable policy target—particularly for developing countries.

Since the emergence of classical development literature, the benefits of free trade have been contested by a small but persistent group of scholars. Among them, Raul Prebisch and Gunnar Myrdal argued that free trade leads countries in the Global South to specialize in low-tech products, while rich countries in the Global North specialize in high-tech ones, thereby reducing the former’s productivity and rates of growth. This is in contrast to the mainstream of the profession, which has theorized that the South might benefit from high-tech sectors in the North through cheaper intermediate inputs and access to better technologies, which can in turn encourage productivity. From the perspective of economic theory alone, then, the question of free trade’s impact on growth is ambiguous.

But policymakers, particularly since the 1980s, have acted in accordance with the positive assessment. Since the creation of the World Trade Organization in 1995, free trade has been embraced by almost every country in the world, following the promise of higher growth rates and higher living standards.

Thirty years on, we can ask: Did the extensive trade liberalization of the 1990s lead to higher economic growth rates? On this question, the answer is less ambiguous: it did not.

My most recent research shows that there is no positive relationship between trade liberalization and economic growth during the Great Liberalization of the 1990s. I reach this conclusion after critically revising the statistical analysis in an earlier paper by Antoni Estevadeordal and Alan M. Taylor, which found that trade liberalization led to higher growth rates. In my study, I show that their findings are not robust; the positive relationship disappears with simple modifications to their research design, and so we cannot ascertain that the trade liberalization of the 1990s impacted growth rates. More precisely, Estevadeordal and Taylor’s original results depend on several flaws: outlier countries, among them China; inconsistent tariff data for specific countries; inappropriate treatment year; and the specific growth data used in the analysis. Once we address these four aspects of their study, the result disappears.

The role of outliers and growth data are particularly important. The impact of China on observing trade effects is crucial, because China’s economic development in recent decades is a historical exception. Market reforms are undoubtedly a part of the story, but the role of the state is unique, as the agent of a process Isabella Weber has called “experimental gradualism.” In pure statistical terms, trade liberalization occurred in China during the 1990s, and it coincided with an acceleration of economic growth. But the assertion that this accelerated growth was caused by trade liberalization is a shaky one. (Many other exceptional processes were at work within China, such as the extensive use of industrial policy, economic planning, strict requirements of technology transfer and local content to FDI, among others—most of which are difficult if not impossible to capture in quantitative variables for regression analysis.) As soon as we remove outliers like China, identified using established methods in regression analysis, the positive relationship between free trade in the 1990s and economic growth vanishes.

Why is that the case? PPP data from the World Bank is built on certain assumptions and is constantly being revised; the specific growth data used by the authors is not publicly available anymore, meaning the assumptions in its calculation were probably revised. While the authors didn’t have this information when doing their paper, the fact that using three other data sources causes the results to disappear makes a strong enough claim against their findings—and for the disappointment of free trade.

It is therefore not possible to assert that free trade in the 1990s accelerated economic growth worldwide. The supposed benefits that free trade was going to bring in terms of economic growth didn’t materialize. Nevertheless, my results should not be taken as suggesting there is no impact of free trade on economic growth; rather, the answer depends on specific historical, institutional, and economic conditions. The results should be taken as an invitation to introduce nuance to the mantra on free trade, to revive theories that emphasize the contingent effects of tariffs on growth, and to promote historical analyses that can uncover the details about specific episodes of tariff changes.

We can look, for example, to the work of David DeJong and Marla Ripoll, which is very much in the spirit of early theory by Prebisch and Myrdal, and finds that the effect of free trade on growth is different for developed countries (positive) and developing ones (negative). Taking up this kind of analysis, where effects are not assumed to be uniform, and complementing our analyses with good case studies and historical context, is where I hope research on trade and development moves in the near future. Trade matters, and we have good reason to believe that effects exist—but not necessarily in the way we have been told.

What is the legacy of the First Globalization of the late nineteenth- and early twentieth-centuries on the economic fortunes of countries during the Second Globalization? To what extent have countries’…

2021 marked the centenary of the creation of the Chinese Communist Party, born of the May Fourth Movement of 1919. History textbooks tend to claim that the Movement emerged out…

Why did the Ever Given capture our collective imaginations? At the end of its week in the spotlight, the poet Kamran Javadizadeh wrote: “I too am ‘partially refloated,’ I too…