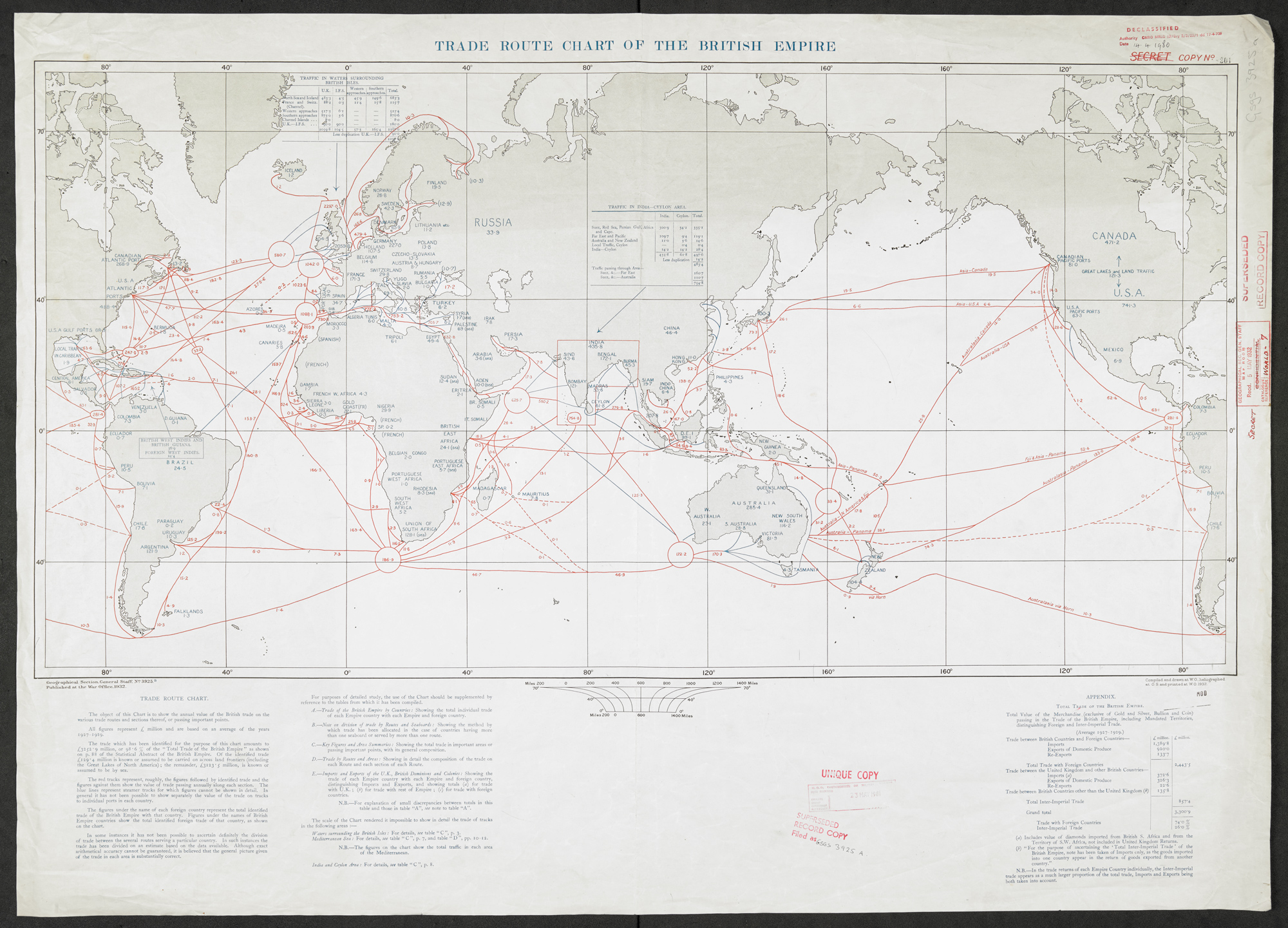 The British Library, Trade route chart of the British Empire

During the first era of globalization (1870–1913), the global division of labor was stark. Britain and other Western nations largely produced manufactured goods, but they also exported a whole range of temperate agricultural goods like wheat, beef and barley. Elsewhere in the European colonial empires, products like cotton, cocoa and coffee were exported, often at very low prices and sometimes with forced labor, to sate a growing demand in the global economic core for tropical luxuries. More than a century has passed since World War I heralded the collapse of this world order. Today, the globalization wave that has shaped the world since the 1980s is ebbing.

What is the legacy of the First Globalization of the late nineteenth- and early twentieth-centuries on the economic fortunes of countries during the Second Globalization? To what extent have countries’ positions in the international economic order been persistent across the two globalizations, with some trapped at the bottom and others comfortably on top?

Long-term development trajectories are commonly explained through the convergence hypothesis. Derived from neoclassical growth theory, it states that “initial conditions have no implications for the long-run distribution of per capita income.” The hypothesis suggests that history has no persistent bearing on countries’ relative wealth: if left to the laws of the market, poorer countries are expected to catch up by outperforming richer countries in their rates of economic growth. However, the convergence hypothesis is not backed by empirical evidence—extensive testing has not heralded the results that standard growth theory would expect. In an effort to elucidate these findings, a quickly growing “persistence literature” has proposed a range of explanations for why countries’ relative wealth today is historically rooted in institutional quality (referring in this case to property rights regimes and liberal representative democracy), culture, religion, geography, or even genetics. Crucially, the persistence literature seeks to explain the lack of convergence while leaving the neoclassical growth theory which underpins it untouched.

Understanding the path-dependence of productive capabilities is crucial because it suggests that the ways in which countries were integrated into the global division of labor in the previous globalization has a bearing on their present and future growth. Rather than catching up to high-value exporters, countries that started off as raw material exporters are likely to maintain low productive capabilities in the long run. On the other hand, early industrializers are expected to remain at the top of the global productive capabilities hierarchy. Of course, the productive capabilities distribution in this era is not a result of the free play of the market. The patterns of export identified by this framework reflect the structures and interests of empires, and thus allow us to integrate the historical trajectories of empire into our study of economic development.

To test the long-term persistence in productive capabilities, we have assembled a large new database of global commodity exports from 1897–1906. We exploit the fact that this period was the high point of colonial trade statistics and use a large variety of primary sources across five languages. To the best of our knowledge, ours is the most ambitious census of world exports for the previous globalization to date. This allows us to investigate the long-term wealth of nations in ways that aren’t possible with GDP data. The latter is sparse and unreliable for large parts of the world before the Second World War. We use export diversification, economic complexity, and export sophistication, as well as the manufacturing share of exports as key indicators of countries’ position on the global productive capabilities ladder. We have converted our historical data into the Standard International Trade Classification. This allows us to measure these indicators in a consistent fashion across a century.

In Figure 1, we map global export diversification across the two globalizations. It clearly suggests persistence. The continued dominance of Europe and North America after decades of deindustrialization catches the eye. China and India are still surprisingly diversified at the turn of the twentieth century, despite a long period of decline in native industries at this point. From the vantage point of our comparison, the recent rise of Asia appears as a re-emergence for some key countries. Africa is largely trapped at the bottom of the diversification hierarchy and several countries are ranking even lower today than at the time of direct colonial domination. There are some hopeful cases of catching up in Latin America. Eastern European and Middle Eastern countries have mostly fallen behind.

In Figure 2, we plot economic complexity—a measure that combines information about the diversification of economies and the ubiquity of commodities in exports—across the two globalizations. This measure, too, leaves little doubt about persistence in productive capabilities: the higher a country’s economic complexity a century ago, the higher it is today. We find the same strong and positive relation for our other proxies of productive capabilities. Our econometric analysis confirms that the great impact of history on today’s productive capabilities is statistically significant, quantitatively large and robust to controlling for variables usually considered as important drivers of growth and export diversification such as economic liberalization, human capital, and the quality of institutions. We also demonstrate that our results are not driven by persistence in geography or institutions.

Not only is the hierarchy in productive capabilities highly persistent, but countries’ export baskets under the previous globalization predict more than half of the variance of today’s real GDP per capita. What you exported in the past matters for where you are on the development ladder today. This is the case not because of cultural traits, geographic conditions, or genetics, but as a result of the ways that countries have been integrated into the global division of labor in the first place and how the forces of competitiveness have reproduced the same hierarchy of global productive capability. Yet, if colonial status correlated highly with productive capabilities at the turn of the twentieth century, countries that were European overseas colonies had fallen even further behind by the turn of the twenty-first century. The long shadow of colonization cannot be captured simply by the path dependence in productive capabilities. It needs to be theorized in its own right. Refocusing the explanation of long-term differences in development to economic factors and a cumulative dynamic is a first, preliminary step in that direction.

The Dollar and Empire

Though the lockdown in 2020 threw many workers out of work, the big fiscal stimulus, fueled by government debt and an unprecedentedly large monetary expansion, offered stimulus checks and elevated…

The Dollar and Empire

What does the US dollar’s continued dominance in the global monetary and financial systems mean for geo-economic and geo-political power?