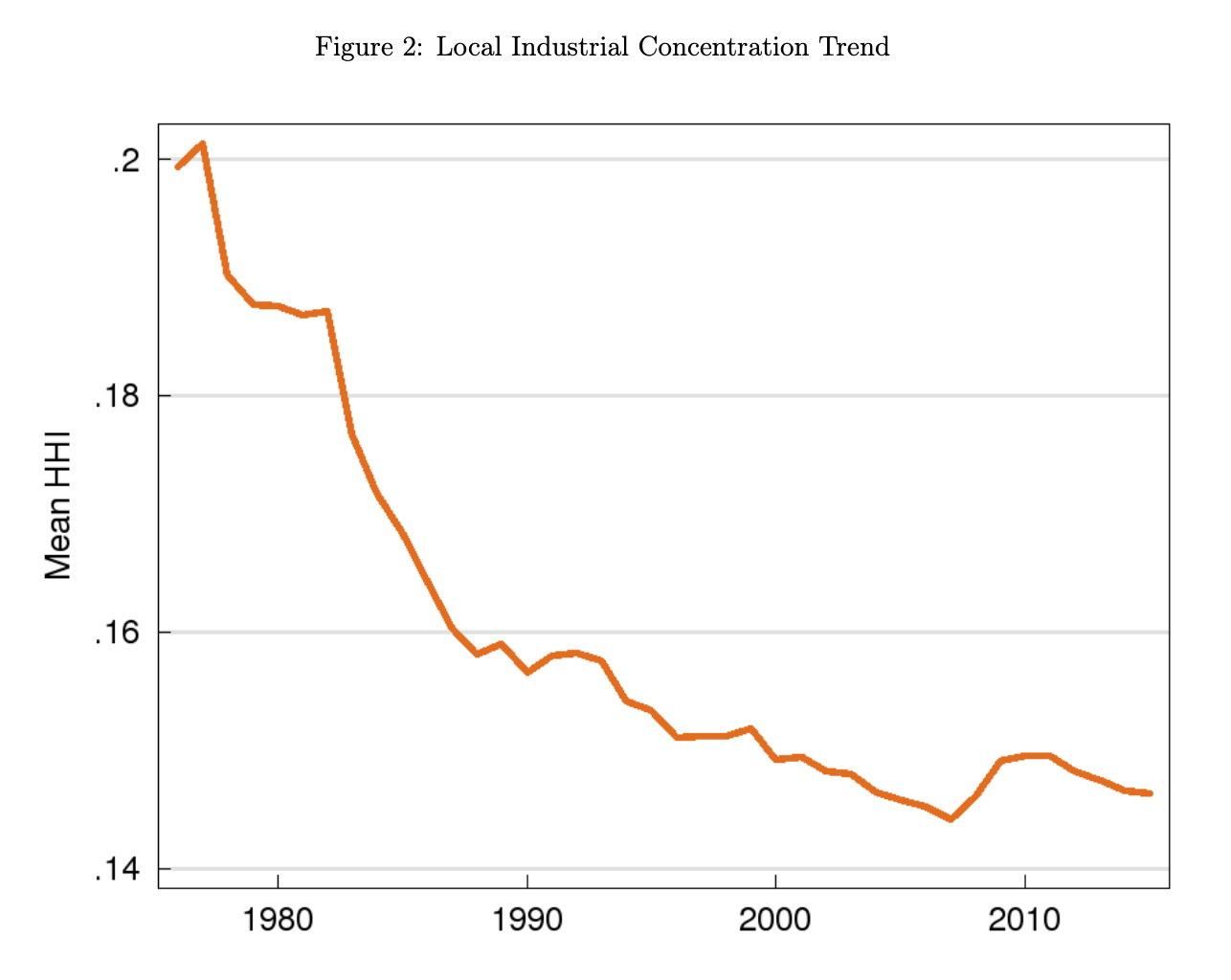 Early on in The Wealth of Nations, Adam Smith asked who had the edge in negotiations between bosses and wage laborers. His answer: the bosses. In the case of a stalemate, landlords and manufacturers “could generally live a year or two” on their accumulated wealth, while among workers, “few could subsist a month, and scarce any a year, without employment.” Thus, concluded Smith in 1776, “masters must generally have the advantage.”

As economic thought progressed over subsequent centuries, however, Smith’s view of labor markets gave way to the reassuring image of perfect competition. Provided there exists a large number of employers and a flexible labor force, competition for workers should push wages to their upper limit. In the view that undergirds labor econ 101, the healthy interplay of supply and demand erases the general advantage Smith ascribed to bosses.

In recent years, a model more in line with Smith’s intuitions has grown to challenge the neoclassical ideal. Under the banner of monopsony, economists have built up an impressive catalog of empirical work that offers a more plausible baseline model for labor markets. Once more of a niche subfield, monopsony now attracts practitioners from a wide range of economics departments. President Obama’s Council of Economic Advisers devoted an entire policy report to monopsony research.

The theory of monopsony has a long history; what’s novel in recent research is the use of big data to measure it at a national scale. To take a notable recent example, Kevin Rinz, a researcher at the U.S. Census Bureau, found that as employers grow larger and more concentrated—a classic indicator of monopsony power—wages suffer. Using internal Census data, Rinz estimated that a local increase in employer concentration from the median up to the 75th percentile is associated with a 10 percent drop in workers’ wages.

The reasoning behind the monopsony model is straightforward. Rather than starting from a mental picture of innumerable identical employers battling for a pool of workers, monopsony imagines an extreme case of just one major employer. Think of an Iron Belt company town or an Appalachian coal mine. Absent organized labor, the firm will push wages below what would obtain in a competitive market, where underpaid workers can always seek greener pastures at other employers. Just as monopolies push prices up, monopsonies keep wages low.

For most workers, of course, the contemporary labor market does not resemble a company town. But the crucial point is the assumption of wage-setting power. Presuming that firms have at least some power to set wages, monopsony theorists argue, provides a more fruitful approximation of reality than the competitive model, in which individual firms pay only what the market dictates.

This shift in perspective has major ramifications. The monopsony model predicts, for instance, that minimum wage increases will lead to few, if any, job losses—a pattern observed in numerous minimum wage studies—as long as markets deviate from perfect competition. In short, competitive models presume each worker is paid very close to the value of what they produce for the employer, so that any externally imposed wage bump will make it uneconomical to employ so many workers, leading to layoffs. In contrast, the monopsony model assumes a wedge between what employees produce and what they are paid, so that a modest minimum wage hike may cut into profits, but won’t put businesses in the red.

The new studies into monopsony power test the prediction that the fewer employers there are in an industry, the lower the wages will be. To do so, researchers have drawn from vast data sets covering wide swaths of the American workforce. Although their methods vary, these studies arrive at a similar conclusion: As labor markets become more concentrated, paychecks take a hit—particularly for those at the bottom of the pay ladder.

In the Rinz working paper, data pulled from millions of Census filings produce a nuanced picture of the U.S. workforce. Beyond finding a correlation between bigger employers and smaller paychecks at the local level, Rinz describes how monopsony power increases inequality between those at the top of the income ladder and those at the bottom—particularly older workers, white men, and those with a high school diploma or less.

It might be tempting to apply these findings to the generational rise in American income inequality. But Rinz cautions against this. A counter-intuitive fact about the U.S. business landscape is that since the late 1970s, industrial concentration has fallen locally even as it has risen nationally. As other researchers have confirmed, the decades-long consolidation of industry into fewer and fewer hands might hold nationwide, but not necessarily for individual communities. (Only in the last 15 years have a majority of localities seen rising concentration).

Average employer concentration at the local level for the top four firms in every industry. HHI refers to the Herfindahl-Hirschman Index, which increases with higher levels of concentration. Source: Rinz (2018).

Average employer concentration at the national level for the top four firms in every industry. HHI refers to the Herfindahl-Hirschman Index, which increases with higher levels of concentration. Source: Rinz (2018).

This dynamic reflects the rise of chains. Pharmacies, for instance, were once mostly local affairs. But as CVS and Walgreens multiplied, localities that had only one or two employment options for pharmacists now had three or four. Even if the chains put a local pharmacy out of business, there would be more overall employment options (and often higher wages) for a pharmacist at the local level, while nationally the number of pharmacy companies declined. In short, Rinz argues, we can not blame rising inequality on growing local concentration among employers.

Other recent investigations into monopsony have brought similar nuance. A working paper from Yue Qiu of Temple University and the University of Minnesota’s Aaron Sojourner used big data to confirm Rinz’s broader conclusions. Among their other findings: the wage effects of monopsony could be counteracted by unions, and increased employer concentration is associated with a lower probability of workers being covered by health insurance.

These studies lend credence to a model that for generations has been taught, if at all, as a curious special case. A 2003 review of leading labor economics textbooks found that authors spent, on average, just 8 pages out of 500 discussing monopsony. But the breadth of the recent research suggests that monopsony is a ubiquitous force in American labor, not some rare oddity.

There are other barriers to monopsony becoming an accepted theory of labor market dynamics. One common and oft-repeated misunderstanding: If dominant firms have monopsony power, why do we see larger, more profitable firms paying higher wages? Doesn’t monopsony theory predict lower wages among superstar firms like Apple and Google?

Leave aside the fact that Silicon Valley recently provided an uncommonly overt example of firms actively colluding to hold down wages. The truth is, monopsony theory does not deny that industry leaders might pay their workers more. In the most fully developed monopsony model, formalized in Alan Manning’s 2003 Monopsony in Motion, super-productive firms should pay higher wages (even if a greater portion of an employee’s individual contribution goes to profits). The large-firm wage premium, insofar as it still exists, actually supports monopsony.

Misapprehension of monopsony might stem in part from its name, supplied in 1932 by the pioneering Joan Robinson. Taken literally, it refers to a market with just one seller. In Manning’s theory of monopsony, however, the concept covers all the frictions and informational asymmetries present in labor markets. Wherever obstacles keep workers from easily switching jobs, or discovering outside job openings, or knowing what their coworkers make (a particular problem for women), the employer has an edge. The more edges a firm has, the more it can hold down wages.

Note that nothing in the exposition above refers to the size of the firm. Being large helps, but it doesn’t guarantee wage-setting power. That’s why recent monopsony work has also focused on phenomena such as the broad expansion of employee non-compete agreements, which can prevent workers from seeking out better-paying opportunities. To the surprise of many, non-competes have been found to cover workers cross the spectrum, from highly trained scientists to Jimmy John’s sandwich makers.

It remains difficult, however, to consolidate the various potential contributors to monopsony power into a metric as tractable as employer size. Despite this limitation, research has been fairly consistent in pointing toward the existence of monopsony exploitation. A recent meta-analysis of 801 estimates across 38 published studies approximated that monopsony could create a wage markdown, or gap between real and potential wages, of up to 26.7 percent.

It would be naive to presume employers have absolute power over wages. If workers had no sway, we wouldn’t see wages rise when unemployment falls suitably low. But it would be similarly naive to think employers lack any wage-setting power. As the monopsony model suggests, it is reasonable to begin from the assumption that employers do set wages. The question is how much.

Again, what’s new here is the methodology, not the underlying ideas. As the patron saint of free-market economics wrote in 1776: “Masters are always and everywhere in a sort of tacit, but constant and uniform, combination, not to raise the wages of labour above their actual rate.” Today, at least, that idea has a name.