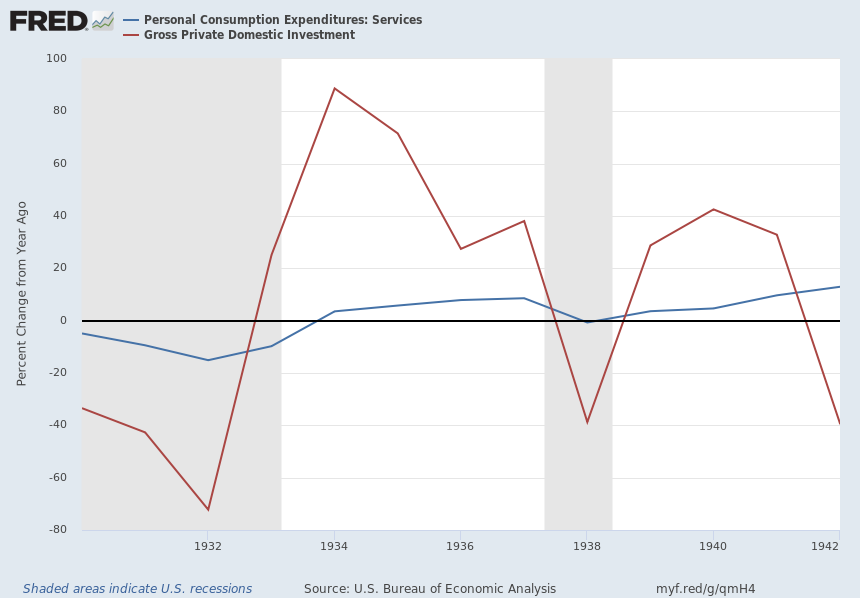 It is hard to see how the United States can avoid a recession. Unemployment insurance claims have already surged, and this week’s numbers look to be in the millions. All indications point to one of the fastest plunges of GDP in US history. Facing this, we may want to turn to previous American recessions to think about our immediate future. But this recession will be different in at least one major way from those of recent memory: services are hit first. In most recessions, services are basically acyclical—they just don’t move up and down with the booms and busts of the economy. The exception here is the Great Depression (see the first figure below), but there the decline in investment is much more severe, as is the upward swing in the recovery. Services, it seems, just don’t fall that much—even in the Depression.

However, this decline in the Depression is related to the deflation of the early-1930s. This is a nominal series, in dollar terms. If we control for changes in inflation by dividing the nominal services consumption series by the PCE price deflator, we can see that the real series is even more acyclical, as shown below.

Services make up a little less than half of the economy now, as we can see in the above figure. The share of services surged in the Depression, as the goods-producing sector imploded, but data doesn’t go back before 1929. Goods production was particularly important in mid-century—this is when the manufacturing share of the economy peaks. In general, services go up as a share of the economy during recessions (indicated by the shaded bars), while other parts of the economy shrink more quickly. As we know, services largely involve human interaction. In a pandemic, unlike in other recessions, that will mean sales in the service sector will collapse because of social distancing. And unlike goods, the output of the services sector cannot be stored, which means layoffs will start very soon as businesses adjust their employment downward. For example, while people’s hair will continue to grow, we may see many bankruptcies among barbershops and hairdressers as people cut their own hair to avoid infection. If people cut their hair at home, there won’t be much of an effect of pent up demand to cause demand to surge once the pandemic recedes. This is similar to what we see when people stay home due to extreme weather events—people don’t eat out at restaurants more in the wake of the storm. When previous recessions ended, customers could go back to the dealership and buy some of the inventories of cars available. Once we get COVID-19 under control, customers may return to their favorite restaurant and find it shuttered; this market signal for companies to ramp up production and rehire will be interrupted. These dynamics are very different from what we’ve seen in basically any recession in modern experience.

February data show retail employment peaked just below 16 million employees and is down closer to 15.5 million now. The retail sector is already hurting, and the closure of malls is likely to accelerate. Meanwhile, the restaurant industry employs over 12 million workers, and layoffs in this industry will be painful as restaurants are forced to close or reduce staff and people stay inside. In the US, total nonfarm employment is about 150 million workers. In February of this year, the retail and restaurant industries combined made up over 18% of total US nonfarm employees; almost one in five US nonfarm workers works in these two sectors alone. If we take the over 100 million workers in the overall private service sector, they make up over 70% of total nonfarm employment. By contrast, all employees in automobile manufacturing, including parts production, are less than 1 million workers, less than 1% of total employment. A recession that begins with a shock to the services sector, which employs a much larger share of workers, can only accelerate job losses relative to a recession that starts in goods-producing industries. For every million in real spending (based on 2012 dollars), there are about 15 employees in the service sector, versus 4.4 employees per million dollars of spending in the durable goods producing sector, or more than three times as many employees in the service sector. As spending falls in services, the job losses will come in a torrent. Already vertiginous initial claims for unemployment benefits are poised to become record-breaking in the weeks ahead.

As Americans begin to grapple with looming unemployment, they will likely cut back further, beyond the spending that is no longer occurring due to social distancing. This will spread the downturn to the goods producing sector as people delay purchases of consumer durables and other consumer goods—the usual dynamics in a recession. Even people who might spend will be stuck at home. Firm investment cannot but fall as firms are much more capacity than they need to make sales. As demand for air travel (another service) collapses, it’s hard to see when new airplane purchases will next be made given that coronavirus appears to be here to stay in some form. Boeing has a lot of cash and has many side businesses, but their profitability will be impaired significantly in 2020 in the wake of a wave of order cancellations related to the 737 MAX.

The coronavirus epidemic has the potential to be one of the biggest economic shocks ever experienced. But the response to a sectoral shock like this one should not initially be to stop GDP from contracting, as social distancing is necessary to control the virus. The bill drafted by the House Democrats, “The Take Responsibility for Workers Act,” strikes a promising balance, with a focus on addressing workers and sectors who will be hit hardest by this immediate health and economic crisis—but it is just a start. We will need a bold policy response, on the magnitude of a wartime crisis, to able to return to normalcy. Without aggressive fiscal response, this, the first services recession, will be very long and painful.

Bretton Woods is often associated with les Trente Glorieuses, the triumph of a certain kind of social democratic governance system, and American hegemony in Western Europe. The postwar system of…

In September 2022, 62 percent of Chilean voters rejected the country's proposed new constitution. The defeat took many by surprise—the demands to rewrite the existing charter had been loud and…