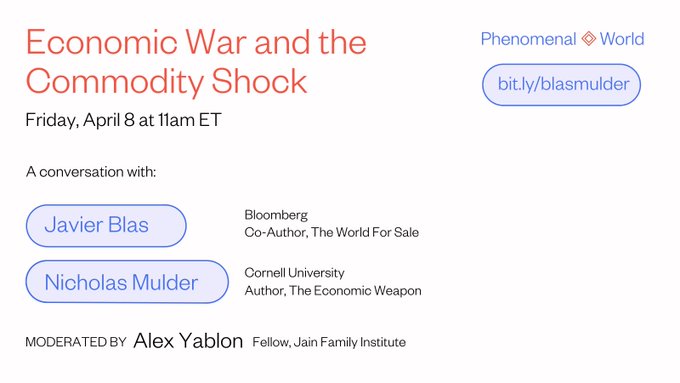 The war in Ukraine has unleashed both geopolitical and economic strife, and nowhere is the latter clearer than in the volatile commodities market. Commodities prices have fluctuated wildly since the Russian invasion began and the US-led coalition retaliated with extraordinary sanctions on Russia’s financial system and trade networks.

While diplomatic relations with Russia have been deteriorating for more than a decade, the Western attempt to sever all economic relations with the country may mark a historical turning point. For the first time in decades, the world finds itself in an economic crisis originating not with the financial sector, but in the real economy. The economic disruptions of war itself and the breakdown of financial and trade ties with Russia—a global commodities powerhouse—have had repercussions around the world.

In April, Alex Yablon moderated a discussion between Bloomberg columnist Javier Blas, co-author of The World For Sale: Money, Power, and the Traders Who Barter the Earth’s Resources, and Cornell historian Nicholas Mulder, author of The Economic Weapon: The Rise of Sanctions as a Tool of Modern Warn, on the implications of the Russia sanctions. Read the edited transcript here. View a recording of the full conversation here.

The war is the direct cause of Ukraine not being able to export—shipping through Odessa is blocked. In Russia, it’s not so much military factors as much as the global corporate backlash against the Russian economy. Insurance , shipping, and many other factors are much more difficult to arrange. In Europe, a point has been reached where all the relatively painless sanctions have been imposed, and now a pretty acute and heated political argument over burden-sharing is emerging: the recent EU package that included transports and shipping immediately led small member states like Malta, Cyprus, and Greese, with large merchant marines, to push for carve outs. There are no painless options left, and it’s going to be a question of who takes the burden. Different sectors will hit different countries in that regard.

Economic War and the Commodity Shock

Economic War and the Commodity Shock

The war in Ukraine has unleashed both geopolitical and economic strife, and nowhere is the latter clearer than in the volatile commodities market. Commodities prices have fluctuated wildly since the…

For the global hegemon, pulling the trigger on crisis management seems to consist primarily of posting PDFs to government websites. During the March 2020 financial panic, as the coronavirus first…

In early 2020, the “dash for cash” in the US Treasury market prompted the Fed to relaunch its dollar swap lines, which it eventually did in mid-March of that year.…