Party of the Future? 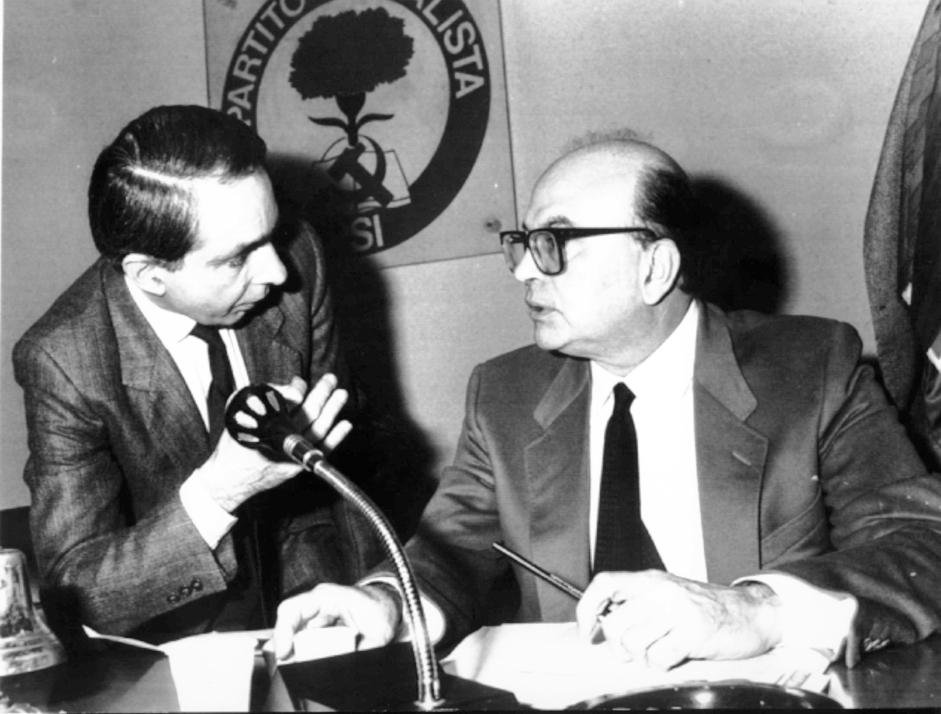 An interview with Giuliano Amato

Maya Adereth: How would you characterize your ideology when you first joined the Socialist Party?

Giuliano Amato: I joined when it broke with the communists in 1956, after the invasion of Hungary by the Soviet Union. The political culture when I entered was one which stressed the protection and expansion of social rights—my early experiences were in a mountainous region of Tuscany where marble was drawn for Michelangelo and other sculptors. My constituency was formed by miners extracting this marble, and in 1963, when the Socialist Party first considered a coalition with the Christian Democrats, the miners were absolutely horrified. They couldn’t believe that the party would stand with their employer in government. When the coalition took place, I left the party and joined a leftist formation named PSIUP, the Socialist Party of Proletarian Unity. This gives you an idea of the importance of class politics and social rights for myself and for those around me.

The moment in which I found myself actively shaping public policy was also the moment in which the cost of social rights, and the ballooning of the public debt, was threatening their future. There was a shift in the cultural paradigm, not in terms of goals, but in terms of enforcement. This took place primarily due to the transition of the PCI away from being the party of the future; I still remember this very powerful idea that the butter in Russia was much better than we could imagine. There were propaganda posters in the fifties that promised that one day we would have that Russian butter. This did not remain effective for very long; at a certain point the party ran purely on the promise of building a socialist society. In my view, this promise was much more effective at pacifying the Italian labor movement than the strategy of the Christian Democrats. So, paradoxically, the Communist Party served a conservative function in Italian society.

The big transformation took place in 1968, when popular demands shifted to the present and away from the future. The Communist Party did not want to alienate this new movement, “pas d’ennemis à gauche,” as René Renoult said. But if it wanted to remain relevant in this moment, it had to begin to develop a program for today. And as the left shifted from the future to the present, the scale of demands for the present grew. When I was in government, I remember proposing to increase pensions. Immediately there was a communist proposal to increase them four times more. The belief among the left was that social benefits were a fundamental right enshrined in the constitution, and money was only a means to be found. Given that Italy had the most popular communist party in Europe, they had absolute cultural hegemony.

My party was schizophrenic. It had in it the legacy of the anarchist movement, this idea of unrestrained freedom, which in the era of civil rights made it a pillar of the struggle for abortion, divorce, and same-sex marriage. The communists were tied to the masses, and in a Catholic country, they were not so keen to advocate for divorce. Our great poet and filmmaker [Pier Paolo] Pasolini was expelled from the party for being homosexual. This was astonishing to the socialists, but this was what happened.

As treasury minister for the Socialist Party, I struggled to convince other party members that what I was doing was actually necessary. There were elements of the party which were aware of the need to balance social rights with financial stability, but there were some elements of the party which were more unwavering in their advocacy for the expansion of social rights than the communists. Frequently, members of the Communist Party would offer me support behind closed doors, which they would never publicize. The communists were excluded from government, but as the main opposition they sought to build connections with the establishment. They had excellent relationships with the Bank of Italy, for example, which was well aware that social rights have a cost and that the debt could reach a point which was unsustainable. So the communists were also a bit schizophrenic.

In the 1990s, largely due to the constraints of Europeanization, the need to limit public debt became a priority and the protection and expansion of social rights became secondary. This was so true that I remember reading an article which had to argue the point that public health does not exist to save money on health, but to protect the health of citizens. It seemed that the aim was to save money, and the constraint was people’s health. Somehow, this kind of thinking also came to dominate the leftist parties, and in part this is due to the fact that the communists ceased to form an effective opposition.

But little by little, we’ve reduced public expenditure beyond the point which enabled the continuation of social rights, to the point where it has deteriorated them. People have begun to look for other political representatives. At the time, we could not understand the consequences of what we were doing. We could not see the moment in which the loss became greater than the benefits. And the people who lost as a result of these policies went somewhere else.

Davide Ceccanti: Can you discuss the 1960s–80s debates in Mondoperaio which were carried out by Norberto Bobbio, yourself, and other intellectuals of the period? Politically, there was a transformation from De Martino, champion of the communist-socialist alliance, into the system formulated by Craxi.

GA: There was a group of intellectuals around Mondoperaio in the 1970s, of which I was a part. Bobbio was the main father, a very active father. This group was challenging the underpinnings of the communist construction, primarily by asserting that freedom and socialism are in- separable. We argued that by centralizing power, Soviet communism destroyed the freedom it purported to bring. The explosion of the feminist movement and 1968 allowed the socialists to ideologically distinguish themselves from the Communist Party.

The electoral outcome of this separation was a disaster. While we concluded that the youth want more freedom, not more communism, we remained under 10 percent in the election of 1976, while the PCI won 35 percent. The youth voted for them because they had transformed themselves from the party of the future to the party of the present. The collection of articles in Mondoperaio from those years, all the pages written by Bobbio, Galli della Loggia, Cafagna, Benzoni, and others, is beautiful. But electorally it did not work.

After the 9.7 percent result of the 1976 election, De Martino had to resign. Craxi arrived, a young Northerner to replace the Southern professor. Was Craxi an anti-communist? I think so. He used to say that the coalition was unnatural. What Craxi understood, but never fully accepted, is that unlike other European communist parties, the PCI was not reliant on the Soviet Union. It was deeply Italian. This was because most of the original members of the party in the 1930s were more anti-fascist than communist. They entered the party because it was the most efficient organization to combat fascism. If we look at the biographies of Giorgio Napolitano, Alfredo Reichlin, Giorgio Amendola—these were generations of teenagers who realized they were living in a fascist country in the years of the racial laws. They wanted to rebel, and the Communist Party was their vehicle to do it.

Among those who were satisfied with Craxi’s leadership there were two groups: the first, which held that a coalition of the left is something we should reach for in the future, and the second, of which I was a part, who wanted to pursue the coalition immediately. Pertini and I spent hours together when he was president of the Republic, at the time I was undersecretary to the Prime Minister’s office and every week I was supposed to inform the President what the government was doing. After five minutes we always moved to discussing other things, and one thing which he repeated to me was that while he opposed the unitary front of socialists and communists in 1948, he spent the rest of his life fighting to restore left unity. Craxi never denied that unity was feasible, and in the last years of his leadership he began to make some moves towards it. He understood that it was necessary, and, in 1991–92, after the fall of the Soviet Union, it was a real possibility. But the Socialist Party died before it could ever happen.

MA: I’d like to get your thoughts on three specific policy reforms: the first, Il Divorzio in 1981; secondly, the wage negotiations in 1984; and finally, the abolition of the scala mobile, which had adjusted wages to inflation, in 1993. What were you thinking at the time?

GA: Despite the difficulties, I think of this as a happy time because we were not yet at the stage of telling people they had to suffer. In my period, it was a question of integrating social privileges into a general fiscal framework—if the debt of any citizen has a cost, it couldn’t be that the debt of the Treasury had no cost. And we believed we were expanding benefits at a reduced cost because of our low interest rates. This was the idea behind Il Divorzio, and many people think that this policy led to the ballooning of the debt. But the catastrophe behind the debt in the 1970s was unavoidable; at the time it was a progressive decision.

The wage indexation reforms of 1984–85 were advanced by the trade unions. When I was head of the research institute for the national trade union CGIL we studied the impact of the wage indexations on salaries of workers, and union bargaining power, in a context of high inflation. We realized that it was a threat for us, the trade union, because the indexes ate up all of the increases and diminished our ability to negotiate. We sought to slow the pace of indexation in order to preserve the negotiating power of trade unions in the long run. It was quite extraordinary that we won the 1985 referendum against most of the Communist Party on this matter.

My reform in 1992 was also progressive. At the time, people were sometimes able to get their pension in their thirties and they were supported by the state for 60 more years. For instance, since 1973, married mothers can get a pension with less than 15 years of contributions, and civil-service employees with 20 years. I sought to build a universal welfare system rather than one based on categorical privileges. So the balancing that I pursued between the cost of rights and their expansion was one which prioritized equality, fairness, and redistribution.

Third wayism and the problem of representation.

The problem of democratic representation has always turned on the question of the “have-nots”—that is, not only those without wealth and property, but also those marginalized on the basis of race, ethnicity, gender, origin, religion and education. Even in a…

In the 1980s, the left abandoned its language of transformation. Can it be regained?

Some time in 1991 I was invited to give a talk to the Andalusian Confederation of the Spanish Socialist Worker’s Party (PSOE). Afterwards, the secretary of the confederation walked me back to my hotel. I asked him why there was…