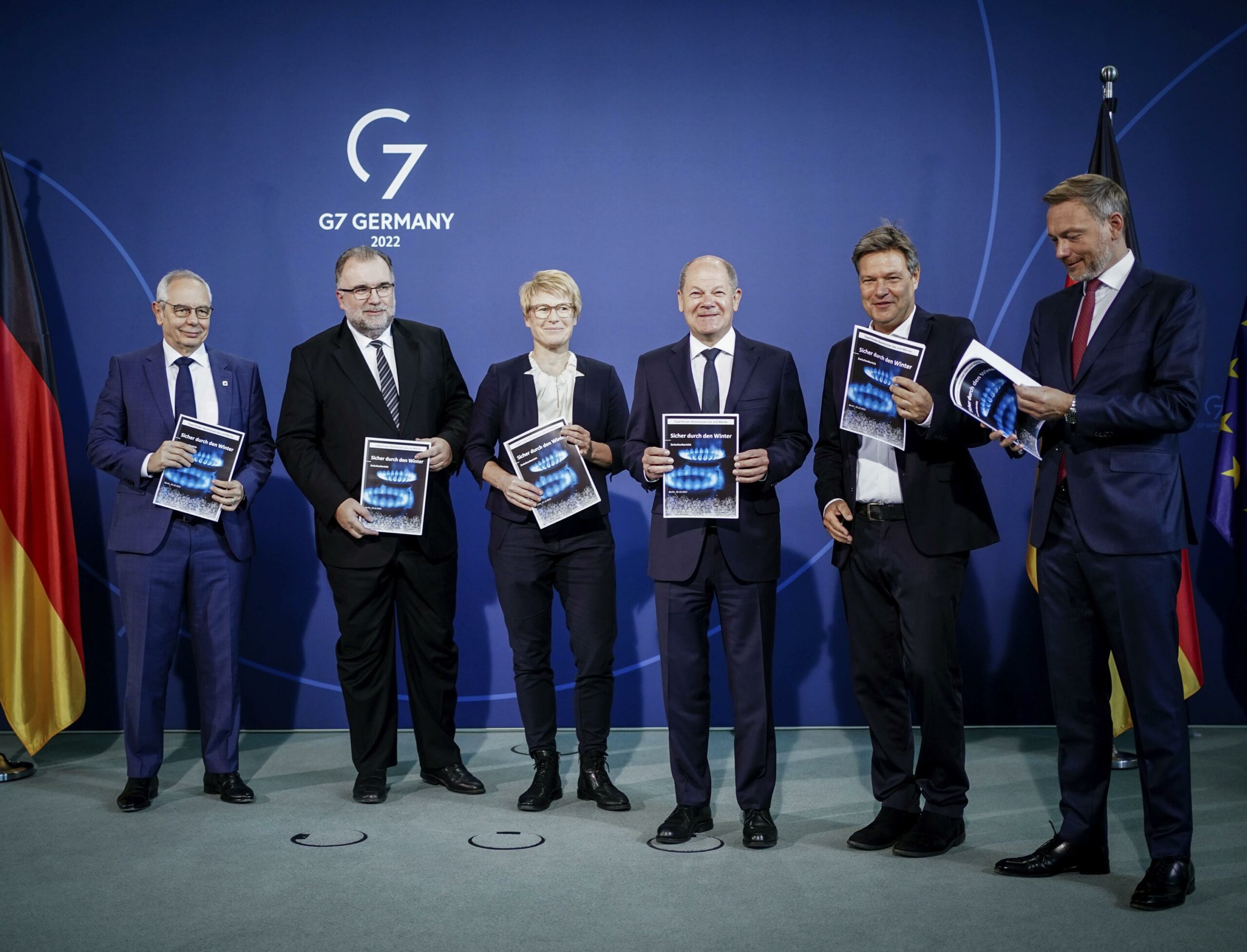 In How China Escaped Shock Therapy (2021), Isabella Weber analyzes how China applied market reforms selectively, avoiding the broad agenda of liberalization advocated for in the West. Retaining oversight of prices for critical goods was key to this strategy.

Recently, Weber served on Germany’s gas price commission, whose recommendations are a pillar of the country’s €200 billion response to the energy price crisis. Her new paper with co-authors Jesus Lara Jauregui, Lucas Teixeira, and Luiza Nassif Pires provides another challenge to prevailing orthodoxy by examining which prices have the greatest impact on inflation. The authors created an input-output model to identify the sectors, goods, and services that more significant drivers of inflation. They also determined three characteristics of systemically-important prices, including their weightage as inputs.

In December, Weber spoke to Kate Mackenzie about the links between energy sectors, inflation, and the green transition. The following conversation has been lightly edited for length and clarity.

An interview with Isabella Weber

Kate mackenzie: You were on the German gas price commission. Have you been involved in a policy process like that before?

ISabella weber: In rich countries there hasn’t been this kind of emergency management in quite some time—there have been Covid-19 measures, but they took a different form. So it was a totally new experience. In Germany, previous government commissions had been set up to address very contentious policy issues, but those were focused on, let’s say, transitioning out of coal. These were big, long-run strategy questions, and the commissions working on them met regularly over a longer period.

The gas price commission, by contrast, was set up on extremely short notice and it was very intense. This speaks to the question of how best to govern economic emergencies, in real time, when relevant institutions do not exist. It’s been tough trying to develop institutional innovations to deal with this extreme situation in energy prices.

One can question whether such commissions are a good way of doing this, or whether they are democratic. But the government did try to come up with a solution, after having waited a long time, and after not having fully appreciated the severity of the situation before.

KM: That seems relevant to some of your earlier research about the institutional muscle that the state needs to have for critical industries.

IW: I think part of the reason it took so long to react in the German case was because there was no mindset that these specific prices can really matter, that they have the potential to undermine not only monetary stability, but even economic and social stability. If you have a central bank that does interest rates but cannot target specific prices, then that limits people’s thinking.

We are living in this age of overlapping emergencies where shocks to essentials are becoming more common, possibly even systemic. It seems likely that more shocks are to come, and they’re going to be more regular than before because of climate disasters, geopolitical tensions and the unraveling of global economic order, the whole disease environment, and so on. If this is the case, we might need a mindset of disaster preparedness in economic policymaking. This requires the state to have monitoring capacity and a policy toolbox for systemically significant sectors.

This is not to say that we want to have constant regimes of price controls, but we do want to be able to intervene if we need to. Ideally we’d be stabilizing prices well before the point where we have a price explosion.

KM: You mentioned a lot of that specific capacity exists, but it isn’t coordinated. Is there an unwillingness from the macroeconomics field to engage with other areas?

IW: For the most part, our economic training does not include a strong education in institutional economics, or even the basic institutions that govern our economic reality, starting from our corporations to the basic government agencies that actually do economic policy. Of course you can be an energy economist, which has become more common because of climate change, or an agricultural economist, and so on. But generally speaking, the assumption behind macroeconomics is that you can talk about the economy without sectoral knowledge, which often leads to a situation where we don’t have these links between disciplines.

Let’s say the energy economists on the commission do not care about inflation—it’s not something they’re worried about, and they’re just concerned about the price of gas and the efficiency of corporations and households using it. The macroeconomists care about inflation but not about the specific situation in the gas market. Now, unsurprisingly, we find that the two areas are actually deeply related. What’s happening in energy markets is extremely relevant to what’s happening in inflation. It’s just that the energy experts don’t care about inflation and the macroeconomists don’t care for the energy markets. We are missing the links between sectoral developments and macro trends.

I think the business analysis and business literature—even business news—are probably the best on this. But in economics, we lack the expertise or theories or ways to study how these two levers are interlinked.

IW: In the paper on overlapping emergencies and inflation, we try to identify systemically important prices for overall price stability. The aim is to create a framework to link sectoral development with the macro level, but we of course also fall short of understanding all the critical sectors we identify in sufficient detail to come up with policy recommendations for each sector.

KM: It seems important to identify what those sectors are. I assume it was also a very difficult modeling exercise, but it seems surprising that this hadn’t been attempted before.

IW: There are contributions by Saule Omarova—we are taking the terminology of systemically important prices from her work. She has been talking about many prices that also show up in our analysis.

In contrast to Saule’s inductive approach or the general discourse around specific inflation drivers, we’re taking a more structuralist and systemic view. This means that we run these shocks through an input/output framework, which captures all the input/output relationships in the economy, and we make use of sectoral price volatilities before the pandemic. We compare what we’d have expected to be “systemic” before the pandemic with the post-shutdown economy, and also to the war in Ukraine. We find that basically the same sectors mattered before the pandemic that also matter more recently.

I’d add that the inflation commentary over the last couple of months has become commonplace in all sorts of policy reports—from BIS to OECD to the Fed to the European Central Bank. Now it’s more commonplace to read that supply shocks in energy matter for inflation, that food has been a big driver of inflation, that housing has played a role, and so on. So from that perspective it’s not surprising to find these prices matter.

We captured three dimensions, or channels, that can render a price systemically significant for inflation:

KM: How did energy sectors show up in the analysis?

IW: In contrast to the Consumer Price Index (CPI), our simulation is capable of capturing indirect effects. If you look at the CPI, you only see the first layer—you don’t see that the price of oil is important because it’s important for plastic or all the things that people consume made of plastic. We show a large number of indirect effects. For example, in our analysis, oil and gas extraction shows up as the second most important category for price stability, which is basically because of an indirect effect. If you think about consumer inflation, you think about gasoline at the pump, or gas for heating, but you don’t think about oil and gas extraction as a sector that matters for consumption. Even something like chemical products have a fairly large indirect component which would come through things like fertilizer—or inputs into industrial processes—which then reside in goods that people buy which affect consumer prices.

This all becomes important with regard to the question of how we’re going to deal with price stability in a green transition. A key finding in our paper is the fundamental importance of fossil-fuel dependence. Trying to overcome this dependence underscores the challenges for monetary stability. This is not to say that we shouldn’t try, but we should take these challenges very seriously rather than hand-waving and saying everything will be fine.

KM: Capital investment in upstream fossil fuels is particularly lumpy, and other aspects of fossil fuels, such as their traded nature and their vulnerability to geopolitics, are volatile. Does your work also point to the possibility of a more stable future?

IW: I think there is potential for it to become more stable, but we should think carefully about how these systems are designed to achieve price stability instead of just assuming the new energy systems will deliver more stable prices. We should still think of our ability to avoid and manage energy shocks. If you look at what happened with China with hydro—if you have a drought you can lose a very large source of your energy supply.

The question is: When were design new systems, which we will have to do, how do we ensure that they don’t build in the same price volatility that we have been struggling with these last hundred years?

KM: What does it mean for the big energy transition scenarios which smoothly swap out one part of the energy system for another?

IW: I think that we will need a lot of redundancy in the transition. We need to build the new stuff before we shut off the old stuff. And you even need the old capacity to build the new capacity.

It’s not as though you have a given amount of energy and you smoothly transition from one system to another. It’s more like first you have an oversupply, and then you shut down the system you want to get rid of. There will be a moment in which you have both, so it’s not a gradually changing composition. This also means that there will be bumps, but maybe fewer bumps than if you were to try to mimic the straight transition path.

KM: What are the implications of this research?

IW: We could imagine performing these exercises for goals other than price stability, by the way. But the specific policy that follows from this would need to be informed by the insights of people working on these specific sectors. It could bring together people who’ve been arguing for specific policies—anti-trust legislation, windfall profits, public investment, price stabilization, and so on. The idea here is not to say we need these specific policies, but to say that these are the sectors that matter and here’s a set of policies that we’ve been talking about.

The Price of Oil

European and American traditions of economic theorizing on price control are intimately connected with war—practices and debates over price control peaked amid the two world wars. The experience of the…

The Price of Oil

In October 2021 the price of gasoline in the United States rose to its highest level in seven years. There were many reasons for this: surging demand following a year-and-a-half…