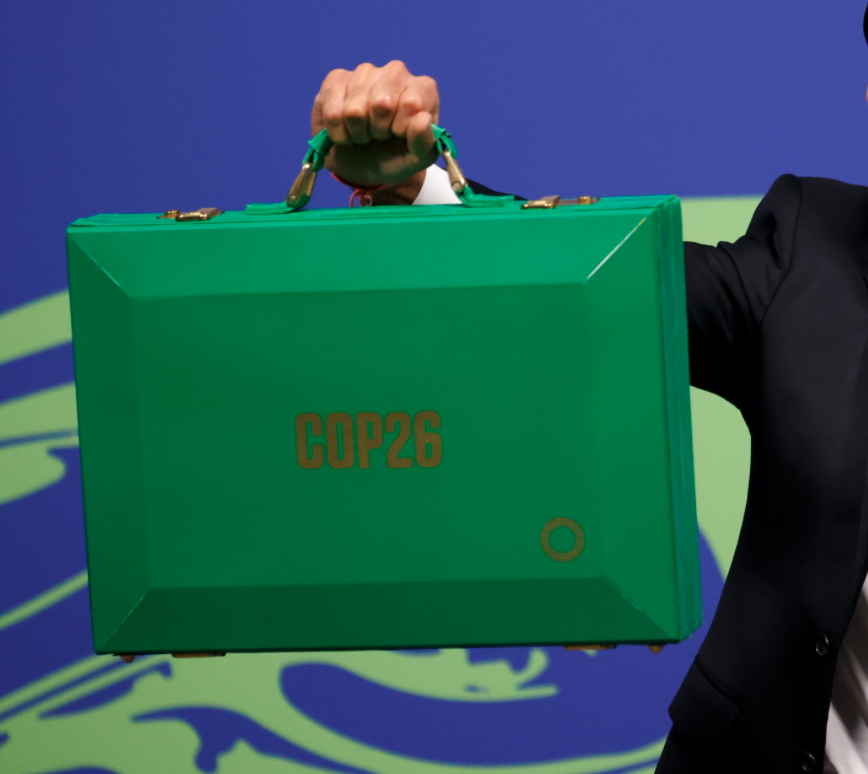 Wednesday, November 3, was private finance day at COP26. For those who follow central banks closely, the event was a chance to gauge whether their recent turn to climate-conscious policy making would translate into ambitious decarbonization announcements. After all, private finance is essential to the survival and profitability of the fossil-dependent economy—it creates dirty credit at prices that ignore climate effects. Such a pervasive market failure, central bankers now routinely argue, is significant enough to generate financial stability risks and to justify new climate policies within independence-centered mandates.

If central banks were ambitious about shrinking private lending to carbon activities, the COP26 press release would have announced plans to explicitly penalize dirty lending in both monetary policy and regulatory frameworks, and specified an ambitious timeline for doing so. These plans would upgrade the Bank of England’s “carrots first, sticks later” approach to decarbonizing its corporate bond purchases (which first rewards, and only later envisages penalizing) to a carrots and sticks approach better aligned with the climate urgency. By rapidly ending the historical carbon bias hardwired into collateral frameworks and unconventional corporate bond purchases, as they have repeatedly promised to do, central banks would ensure that the cost of capital for high carbon activities increases significantly, redirecting financial flows to green activities.

To minimize dirty arbitrage (fossil assets shifting across private portfolios), the central banks might announce the inclusion of private equity and other shadow banks within the scope of the new “carrots and sticks” regime. To further reduce transition risks and preserve an orderly transition, they could recommend new accounting rules for stranded assets (suspending mark to market) in systemic institutional portfolios.

Central banks would also address the structural shortage of green assets by calling on fiscal authorities to collectively develop new regimes of green macro-coordination. The accelerated issuance of green sovereign bonds could absorb the flow of capital leaving dirty activities, and finance nationally-developed green public investment plans and green industrial policies. This might come alongside increased taxation of conspicuous luxury consumption and avoid carbon shock therapy by carefully deploying carbon prices without allowing them to dictate the pace and direction of decarbonization.

Finally, mandatory decarbonization would also accelerate the energy transition in the Global South. By correcting the market mispricing of dirty credit, central banks would redirect the trillions of Global North institutional capital towards renewable energy and green transport infrastructure there.

But this was not the Finance Day press release at COP26. Instead, the Network for Greening the Financial System—the 100-plus central banks working together to design new climate frameworks—made disclosure of climate risks and stress test scenarios the centerpieces of their climate press release. So very 2019 voluntary decarbonization.

The return to the 2019 baseline of voluntary decarbonization—generally remarkable given the ambitious rhetoric of the June 2021 Green Swan conference organized by central banks—is even more puzzling for the Bank of England.  Its governor, Andrew Bailey, outlined three “pivot points” of “climate ambition” in a speech at COP26: micropudential tools (green capital requirements), scenario analysis, and disclosure of climate risks. This was a strangely framed ambition, since it sets the only central bank with an explicit environmental climate mandate back to 2019—before it started the work of greening its corporate bond purchases within a “mandatory decarbonisation” framework.

The central bankers’ rhetoric on Finance Day at COP26 was closely aligned to the preferences of financial capital. It represents a win-win attitude to attacking the climate crisis—one that does not feature a robust role for public investment, nor a commitment to swift decarbonization.

GFANZ and the Wall Street Consensus

The macrofinancial politics of COP26 should be understood as status-quo financial capitalism now entering its green age. Day three of the Conference of the Parties was Finance Day, rather than green public investment day, because of the growing political consensus in the Global North that decarbonization must be finance-led. In a 2021 paper, I termed this the Wall Street Consensus. If the Washington Consensus had its most articulate ambassador in economist John Williamson, the Wall Street Consensus has Mark Carney, the head of the Glasgow Financial Alliance for Net Zero (GFANZ), the UN Special Envoy for Climate Finance, and the intellectual author of the green turn in central banking.

GFANZ gave COP26 its big decarbonization number:  USD 130 trillion “relentlessly, ruthlessly focused on net zero.”  To put that number in perspective, at COP26 rich countries failed again to honor their pledge for USD 100 billion per year in climate finance for poor countries. There was greenwashing even in the headline number, since USD 130 trillion was not the estimated credit flow about to inundate green sectors, but rather the combined assets under management of GFANZ members, many issued to finance dirty activities.

But those USD 130 trillion would not find their way into climate-friendly activities, GFANZ members like BlackRock’s Larry Fink argued, without a little help. Of course, Larry Fink was not calling for mandatory decarbonization, but for public policy and private firms to work together on climate in the same way that they worked together on vaccines.  John Kerry, the US Special Presidential Envoy for Climate, translated such calls for public-private partnerships into Wall Street Consensus lingo: “Blend the finance, de-risk the investment, and create the capacity to have bankable deals. That’s doable for water, it’s doable for electricity, it’s doable for transportation.”

This is the Wall Street Consensus mantra: the state and development aid, including multilateral development banks, should escort the trillions managed by private finance into climate or the Sustainable Development Goals asset classes. The state derisks or “blends” by using public resources (official aid or local fiscal revenues) to align the risk-return profile of those assets (“bankable projects”) with investor preferences or mandates. Transforming climate or nature into asset classes necessitates the commodification and financialization of public goods and social infrastructure, beyond water, electricity and transportation, and including housing, education, healthcare; these have to generate cash flows that pay institutional investors. The consensus understands the state as a derisking agent: its fiscal arm enters public-private partnerships to render them bankable by transferring some of the risks to the balance sheet of the sovereign, while its monetary arm protects investors from liquidity and exchange rate risk.

Indeed, the five catalytic initiatives that GFANZ announced at COP26 all follow the logic of “new asset classes for us, new risks for the state.” Together they make up an alphabet soup of Wall Street Consensus initiatives. Finance to Accelerate the Sustainable Transition-Infrastructure (FAST-infra) targets labelling of sustainable infrastructure assets, an extension of the G20 Infrastructure asset class. In the same vein, Mobilising Institutional Capital Through Listed Product Structures (MOBILIST) promotes securitization products (yes, shadow banking) for SDG financing. The Innovative Finance for the Amazon, Cerrado and Chaco (IFACC) initiative boldly attributes deforestation and ecosystem destruction to the absence of adequate financial instruments for farmers. The Climate Finance Leadership Initiative (CFLI) identifies India as a pilot country for concerted efforts to mobilise private finance around new models for funding sustainable infrastructure and building public-private partnerships, including with the national government and multilateral organizations. The Global Energy Alliance for People and Planet aims to accelerate the energy transition by raising 100 billion in private and public capital.

Beneath these eye-catching promises lies the cruel reality of voluntary decarbonization: asset managers, most notably BlackRock, overseeing 57 of the USD 130 trillion announced by GFANZ, only committed to decarbonizing 20 percent of emissions by 2030—significantly less than the 50 percent scientists believe necessary to stay within 1.5 Celsius warming. Even more illustrative, just one week after COP26, the US auctioned new oil and gas drilling leases in the Gulf of Mexico, on the back of buoyant demand from fossil capitalists supported by around USD 1 trillion in funding from banks and pension funds.

The big takeaway from COP26 is therefore not that private finance will go to great lengths to portray its systemic greenwashing as climate activism. This is rather predictable. The more worrying development is that the state is not only prepared to let finance get away with it, but is willing to subsidize the climate destruction guaranteed by this path.

Perhaps the central bank alignment with the voluntary decarbonization preferences of private finance demonstrates the limits of pinning climate hopes on deeply conservative technocratic institutions. Just as well, critical left voices might argue: Wouldn’t the metamorphosis of central banks into muscular machines of the Big Green State amount to corporate welfare projects that rescue capitalists from ecological disaster, a win-win for capital and the state that leaves current accumulation patterns intact?

In a 2019 essay, Thea Riofrancos persuasively responded to such critiques by outlining a cautiously optimistic case for state-led green macrofinancial regimes, be these called Green New Deal or Big Green State approaches, albeit with the political challenges of any project of deep structural transformation. But there is something additional at stake. Busy setting up straw men (too vague, too top down, too social-democratic, too concerned with growth), the critics have stopped paying attention to the evolving strategies of financial capital.

The dystopias conjured by left skeptics to dismiss the Big Green State are already here—courtesy of the hegemonic Wall Street Consensus. An understanding of how the state-finance relationship and should be the starting point for discussions of how to move from voluntary, patchwork decarbonization, to mandatory, immediate decarbonization.

The Biden administration has committed the United States to cutting its carbon emissions in half by 2030 and achieving net zero emissions by 2050.