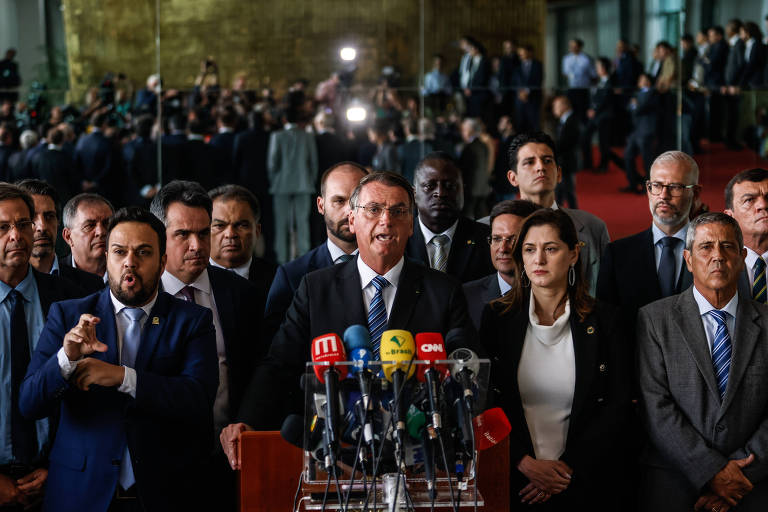 Luiz Inácio Lula da Silva may have won last month’s presidential elections, but the strength of Bolsonarismo has been confirmed. In both houses of the National Congress, Bolsonarismo and its allies made gains, overcoming the traditional right wing. In the Federal Senate, Bolsonaro’s Liberal Party (PL) won fourteen of the twenty-seven seats up for election, giving it the largest number over all. In the Lower House, despite the fact that the left has regained some ground, the PL nevertheless elected ninety-nine deputies—a larger share than any other party. The rural, evangelical, and security caucuses doubled in size. The alignment of the parliamentary forces may be more pragmatic than ideological, but as Souza and Caram put it, the Congress elected in 2022 is still “the most conservative since 1964.”1

The vote for Bolsonaro himself is significant: about 51 million votes in the first round and 58.2 million in the second round. In every single state, support for Bolsonaro grew more than for Lula. Nonetheless, Lula’s victory across the Northeast (winning between 60 and 70 percent of the vote in each of those states) remained decisive, along with the fact that he managed to reduce the damage in Bolsonaro’s stronghold of the South and Southeast.

What explains Bolsonaro’s electoral popularity? His terrible record in government is well known. During his single term as president, poverty and inequality spiked, public services like education and health suffered, and environmental destruction skyrocketed. The projected annual economic growth for the Brazilian economy between 2020 and 2022 is just 1.1 percent; the global average is 1.8 percent.2The government’s notorious mismanagement of the pandemic produced the tragedy of 700,000 deaths. Corruption scandals—in areas like vaccine purchases and education—were widely publicized.

Hypotheses about the supposed conservatism or irrationality of Brazilian society are superficial and inadequate. Costa and Weiss, by contrast, identify four main sources of Bolsonaro’s power: the permanent mobilization of his radical base; the expropriation of nature, public spaces, and workers’ bodies; the discursive construction of popular identity; and the formation of a system of fear, in part by arming sections of the population. Such an analysis is convincing but focusing on how Brazilian financialization has impacted the voting patterns of both the middle and lower classes offers a richer picture.

For all his social conservatism, Bolsonaro’s term in government has been defined by the standard neoliberal orthodoxies. The turn to deregulation, privatization, labor flexibilization, and fiscal austerity began during the first post-dicatorship government of Fernando Collor de Mello, which was elected in 1989. After Collor’s impeachment in 1992, Fernando Henrique Cardoso carried the flame. His tenure as president (1994-2002) was characterized by intense privatization, the contraction of public investment, and fiscal austerity. Manufacturing was all but crushed and the labor share of national income steadily declined. The result has been the reprimarization of Brazilian economy, which has diminished technological progress.

When Lula first ran for president in 1989, he was the preferred candidate of middle-class voters. They continued to support him in his unsuccessful presidential bids in 1994 and 1998, as Fernando Henrique Cardoso oversaw vast expropriations of public assets and social guarantees. Ultimately, this was converted into votes for Lula in 2002, when he was elected in no small part thanks to mass middle-class support.3

When the PT was elected in 2002, it did little to intervene in the neoliberal status quo that had been in place since 1990. Thanks to the commodities boom of that decade, the government was able to introduce some progressive measures such as the a relative valuation of minimum wage, but at  the same time, the government relied on expanding individual credit as a means of access to social services. With the expansion of consumer credit, both the middle and lower classes became dependent on the financial system. In the context of deregulated markets, which Lula had done little to bring under control, debt soared. The working class, which saw expanded access to consumption, remained loyal to Lula, but the middle class had seen its fortunes fall and frustration with the PT set in.  Devoid of collective identity, they embraced the market as the ultimate solution to their woes, seeking to liberalize financial flows (to gain more access to credit and so expand their assets) and to increase foreign direct investment (for skilled jobs and easier access to luxury goods).4 With such demands, the middle class became natural supporters of the openly pro-market policies.

Amid this class realignment came the global crisis of 2008. The impact of the collapse of commodity prices in Brazil was devastating. By the time that Dilma Rousseff came to power in 2011, economic growth had stalled, with GDP plummeting from 7.6 percent in 2010 to 0.1 percent in 2014. Social spending decreased still further. In 2013, for example, the spending on tax and social-security waivers was estimated at BRL 218 billion, while public health and education, together, received BRL 163 billion.5 This set the stage for a middle-class backlash that ultimately exploded in June 2013. Sparked by demands for improved public transport, the protests quickly became a battleground for different ideological strands in Brazilian politics. Thanks to strategic interventions by the mainstream media, which had an interest in turning the tide against the PT, and police repression against leftist movement, the protests gradually turned to the right, becoming a posteriori a popular base against Rousseff.6

This became the backdrop to Michel Temer’s parliamentary coup  in 2016. Temer capitalized on the protests and used them to favor the interests of financial investors; this included attacking labor rights and imposing a social spending cap for twenty years. With Bolsonaro’s election in 2018, thanks to massive support from the middle classes, privatizations increased further. He has dished out more austerity, including a major pension reform raising the retirement age for women and the number of qualifying contribution years, as well as an aggressive reduction in public spending in education, science, health, and environmental protection. The Brazilian economy, despite fourteen years of PT rule, has been given over to the markets.

The Covid-19 crisis dealt a blow to Bolsonarismo. With 700,000 fatalities, Brazil has the worst record in the region. The nation’s overstretched public health system was exposed as hospital beds ran out, medicines were in short supply, and vaccines were delayed. Despite his neoliberal orthodoxies, under the pressure of the pandemic, Bolsonaro was forced to massively increase public spending, creating an Emergency Aid Program that covered 67 million beneficiaries. Cash transfers and sick-leave schemes kept low-income households afloat. These emergency measures quickly came into conflict with his advocacy for fiscal discipline, and so the administration reintroduced austerity in 2021 by creating a subceiling within the social spending cap. Minister of Economy Paulo Guedes advocated to further squeeze public servants’ salaries. In the second half of 2021, GDP shrank. The government saw resignations from ministers Luiz Henrique Mandetta (former Health Minister) and Sérgio Moro (former Justice Minister). The Supreme Court, too, made public statements against Bolsonarist denialism, as did some branches of the business sector.

Bolsonaro’s efforts to recover couldn’t reverse the damage. He attempted to make new alliances with the traditional clientelist right, intensively mobilized his base, and called for mass protests on Independence Day. Most desperately, his government implemented a package of social benefits and subsidies worth BRL 41.25 billion, but to little avail. In the wealthier and higher-educated Southeast, the PT gained 7.7 million votes on its 2018 result. In São Paulo State, Lula gained significant ground and though Bolsonaro was still victorious there, Lula hemorrhaged 1.1 million votes.7 In the southereastern state of Minas Gerais, Bolsonaro was defeated. The middle-class votes that Bolsonaro depended on in 2018 were more divided in 2022.

If the pandemic was responsible for weakening Bolsonaro’s support among the middle classes, his relatively strong showing at the polls in October shows that it did not wreck irreparable damage. The middle class in Brazil remains wedded to the neoliberal model that has been the bedrock of Bolsonaro’s term in power. As for the working class, it remains to be seen how increased household debt will influence their political preferences. Election results indicate that the Northeast vote for the PT was slightly down compared to 2018.8 If working-class debt continues to expand as a means to maintain current levels of consumption, including access to social services, Lula will face major challenges ahead.

Earlier this month, Brazilians went to the polls in an election billed as the most momentous since democratization in 1985. Far-right president Jair Bolsonaro faced off against former two-term president…

According to Brazilian economist Lena Lavinas, social policy under President Lula promoted a logic of financialization and market incorporation, ultimately contributing to mass indebtedness in the Brazilian population. André Singer…