Decision Making in a Dynamic World 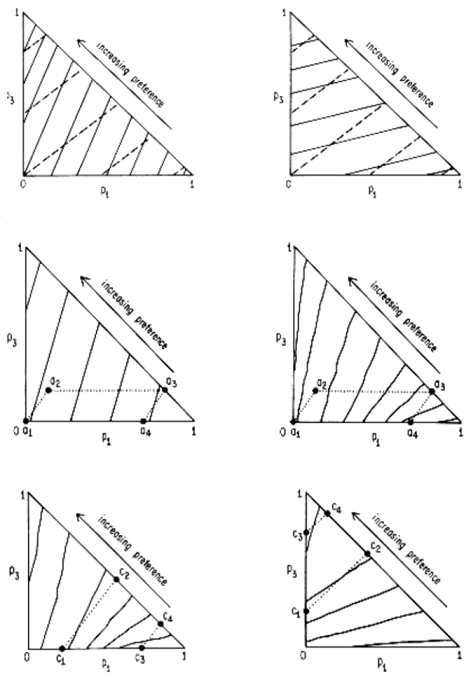 I once wrote a post criticizing modern microeconomic models as both overly complex and unrealistic, leading their practitioners into theoretical dead ends without much corresponding increase in explanatory power. I suggested the entire enterprise of Expected Utility (EU) was a dead end based on a mistake and that I’d eventually write about superior ways of modelling individual decision making under uncertainty. It’s been a long time coming, but below I outline why taking time into account leads to better theories of decision making, and why human psychology does a fairly good job of guiding decisions in a dynamic world.

The Poverty of EU-style Theories

I see EU as an attempt to transpose the mathematical world of probabilities onto the real world of making decisions. It was originally theorized that people make decisions based on the simple Expected Value (EV) of potential outcomes: that is, that they weigh the monetary value by the probability a given outcome will happen, and then add them all up. There was no empirical reason to believe this was an accurate description of how people made decisions, nor was there any scientific value in doing so. One of the earliest contradictions EV couldn’t resolve was the St. Petersberg paradox, introduced by Daniel Bernoulli in 1738: I flip a coin and pay you £2 if it comes up tails, but double the pay out and flip again if it comes up heads; then next time pay you £4 if it comes up tails, but double and flip again if it’s heads; and so on, forever. The EV of this gamble is infinite, so anyone reasoning according to EV would pay an infinite amount to take part in the game. Intuitively, we recognize that this behavior would be both irrational and impossible. Bernoulli proposed to settle the paradox by taking logarithms of the monetary outcomes—interpreted as diminishing satisfaction from increases in money—to make the outcome finite.

Ole Peters has spilled much ink over the limits of this solution. The crux of his argument is that EU treats the gamble as if it is done once for each person, but repeated for many different people, just like in a casino. If, instead, the individual thinks about their wealth over time, they will aim to maximize the growth rate of their wealth rather than the immediate amount, so a different type of calculation should be used. Mathematically this is equivalent to using the ‘geometric mean’ (timesing all the gambles together and rooting them by the number of periods) rather than the ‘arithmetic mean’ (adding all the weighted gambles together and dividing them by the number of periods). By using the former you arrive at a finite solution with no need to introduce any assumptions about the individual’s preferences over risk and money.

I agree with Jason Smith that Peters overstates his case by insisting that EU is a mathematical error; but we can still interpret Peters as arguing that EU theory is inapplicable and proposing a better alternative. Or as Wikipedia puts it: “the St. Petersburg paradox is only a paradox if one accepts the premise that rational actors seek to maximize their expected wealth.” There is no a priori reason to accept this premise, and it seems much more sensible to have a resolution in which individuals maximize their wealth over time—time being an important feature of the real world—and which otherwise makes fewer assumptions.

My friend Cameron Murray’s discussion of Peters provides a good example of why time is important here. Suppose you play a repeated game in which you start with £100, and if a coin flip comes up heads you win 50% of your current wealth, while if it’s tails you lose 40%. The majority of the time your outcome will not converge to the expectation as calculated by EV (blue line). In fact, you will generally lose money (orange lines):

People are intuitively aware of the possibility of going down a ‘bad’ path, which is why in many cases they use decision-making rules which try to avoid this, rather than anything resembling EU. One of the interesting side-effects of this is that not only do most people violate EU and time-consistency in experiments, but the violators actually earn more money! Living in a dynamic and changing world means that humans pursue flexible strategies to adapt to their environment. Thus, not only is EU empirically inaccurate; it is not a desirable standard for behavior.

Heuristics for the Real World

Peters’ contribution is a valuable first step toward dynamic decision theories, although it still rests on maximising behavior and so cannot form an accurate description of real decision making in general. Fortunately, a literature in psychology has taken to questioning the precepts of EU (including modern ‘behavioral’ variants such as prospect theory) and proposing theories more in line with what psychology tells us about human behavior under uncertainty. A significant contribution is the priority heuristic—proposed in a 2006 paper by Eduard Brandstätter, Gerd Gigerenzer, and Ralph Hertwig—which posits that, when faced with a choice of two gambles with two outcomes, people compare outcomes and probabilities separately and sequentially instead of weighting them all together.

To clarify, a ‘gamble’ in economics is typically a set of possible cash rewards, each with a probability. To start, the authors restrict themselves to gambles with two possible outcomes, and look at choices between different gambles. Gamble A could be a 50-50 chance of £5 or £15, whereas Gamble B could be a 10% chance of £50 or a 90% chance of £5. Economists, and to a lesser extent psychologists, have spent a great deal of time trying to predict which gamble people will choose in this type of problem.

Unlike EU theorists, the authors of the priority heuristic draw from an array of psychological literature to determine exactly how—in what order and using what criteria—people do this. They first conclude that there is a lot of evidence to suggest that people neglect probabilities, and are likely to consider outcomes first. They argue that ‘avoiding low minima’ is likely to be considered first because people are predisposed to avoid bad outcomes (see the simulations above). The next consideration is given to a probability, and based on a preliminary experiment the authors hypothesise that as with the outcomes, people will consider the probability of the minimum before that of the maximum. Once the probability of the minimum is known, the maximum is implicitly known so there is no need to include it separately. Thus the third and final consideration is given to the maximum outcome.

Finally, there is the question of how the outcomes and probabilities should be compared across gamblers. Not wanting to introduce a ‘degree of freedom’—a parameter we can manipulate to make our results fit better—the authors choose a rule based on the number 10, although they point out they would like to use an independently determined aspirations level in the future. We are left with the following procedure:

The priority heuristic is then tested across multiple experiments. In summarising its predictive power I cannot do much better than the abstract of the paper itself:

This is an impressive list of predictions which excludes some further advancements made by the decision strategy. Firstly, the heuristic correctly predicts the relative time taken by individuals to make decisions. If they are able to decide based on the minimum outcome, they will spend less time on the decision; if they have to go all the way to the maximum outcome, they will spend more time. Such are the benefits of a more descriptively accurate theory of behavior.

Secondly, in the few (13%) cases where the heuristic is an inferior predictor, it was because there were large differences in Expected Values between gambles. In these cases, simple EV does at least as well as EU or any behavioral theory, which implies simplicity is key to understanding decisions. Thirdly, the priority heuristic is still highly predictive when applied to gambles with more than two outcomes, suggesting that maxima and minima are especially salient for decision makers—a kind of bounding approach that is consistent with people wanting to make sure their decisions are much more likely to produce an upside than a downside.

It is a shame that this theory has not gained more traction in economics given its inherent plausibility and its empirical success, even in this basic form. It would be good to see some more systematic studies of how well EU-followers fare, both in experiments and outside them, including reviewing existing economics experiments where possible. It would also be good to see extensions of the priority heuristic to field settings. Nevertheless, both Peters’ paper and the psychology literature acknowledge much more clearly the role of time and the importance of avoiding a bad path in the change in wealth. While I find it implausible people maximise anything, one way of modifying Peters’ framework might be to look at salient wealth paths based on the kind of criteria used by the priority heuristic and choosing between them. In any case, there’s no excuse for clinging to unrealistic theories when we have such compelling alternatives.